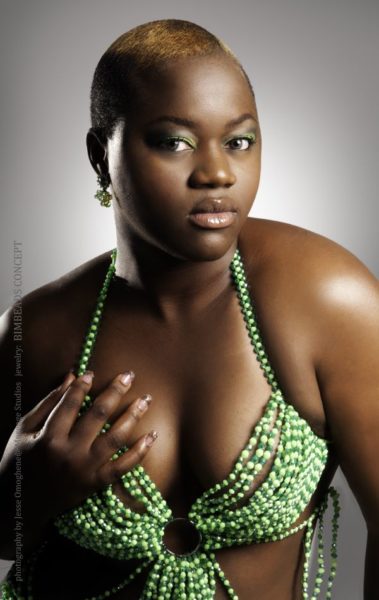 Nigerian singer/actress Evaezi is opening up about her past.

The chocolate-skinned “Tiririn” music act in an interview with Punch Newspapers for its Fashionista segment details a time in her life when she wanted to be fair skinned.

On if she ever wished to be fair in complexion: “Yes, there was a point in my life when I wished I was fair skinned but that was when I was younger and naïve. I think it was after my secondary school or when I was going into the university. I had a crush on a guy and he liked this particular fair girl. I assumed that maybe he liked the girl because she was fair. When I asked around, especially some of my ‘unfriendly’ friends at the time told me to try a particular cream that toned the skin. Instead of saying the cream bleached, they told me it toned the skin. They said it would bring the skin colour out more and I believed them.

As God would have it, I have a very sensitive skin so I cannot use just anything. When I used the cream, I had a serious skin reaction and it was a terrible reaction that gave me a burning sensation. After that, I felt content with my natural skin colour.”

On if she will use skin lightening products: “Never. Would I say God made a mistake? There are some creams that nourish the skin with some vitamins to make it healthier. When you have a healthy skin, it glows but does not change colour. When you start using harsh chemically-enhanced creams because you are trying to be fair, you are stripping your skin of nutrients and its protective cover.

Should such the person need surgery, it would affect the person because by the time the doctors would need to stitch the person, the skin would not be hard enough to hold the stitches. This would definitely cause complication. There are a lot of down sides to bleaching. I love myself the way I am and I doubt if I would want to change my skin colour.”

On enlarging or reducing a body part: “If I was asked this question about eight years ago, I would shout yes. I was a late bloomer and at some point, I was really crazy about breast enhancement. It was the time when there was the craze about Modupe Ozolua. I actually went to how to enquire how much it would cost me to have breast enlargement. Also the girls in secondary school then used to make jest of me because I did not have bust but big buttocks. I always wondered why I was flat in front and big behind.

Then I was thinking of getting breast enlargement. As I grew older, I began to realise that my being big behind is actually an asset. I thank God the boobs being came out. Right now, there is nothing I would want to increase or reduce.”

Evaezi also speaks about her boyfriend, her N100,000 worth of accessories, her love for perfumes, and being a plus sized lady.