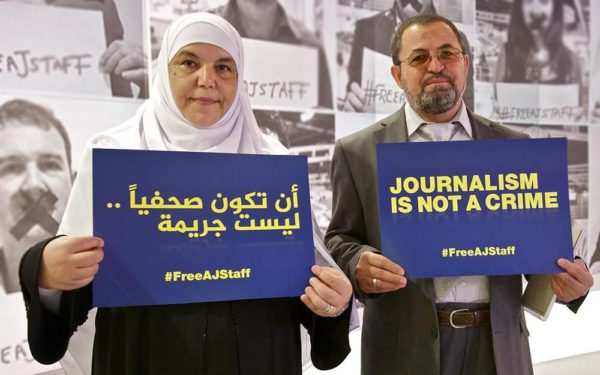 Throughout history, certain courageous, altruistic individuals have sacrificed their freedom for the common good.

Nigerian-raised Egyptian Al Jazeera broadcast reporter, Abdullah El-Shamy, is one of such individuals. He was arrested while covering the Egyptian military’s bloody crackdown on Muslim Brotherhood protesters in August, 2013 in Cairo.

El-Shamy has since been imprisoned for 253 days, and has embarked on a hunger strike to protest his internment. He is currently on the 94th day of his strike.

Three other Al Jazeera reporters were also detained in Egypt: Al Jazeera English correspondent, Peter Greste and producers Mohammed Fahmy and Baher Mohamed, who have been detained since December 2013.

El-shamy’s parents, Elshamy Nusehy Elshamy and Thuraya Elshamy, who are based in Lagos, have been campaigning non-stop for the release of their son and the three other journalists who were imprisoned.

Speaking to Al Jazeera two days ago, his parents expressed that their son is fighting not for himself, but for a free media.

His mother, Thuraya, told Al Jazeera that despite concerns about Abdullah’s health, his family are right behind him in his hunger strike.

“I urge Abdullah to continue his hunger strike, because now it is not for himself, it is for freedom and for all his colleagues. My son is innocent and he loves his country of Egypt. He has always reported the truth; his motivation has always been humanitarian professional causes,” she said.

Calls for the journalists’ release have also been made from the White House, the British Foreign and Commonwealth Office, and the European Union.

Our thoughts and prayers go out to the families of these brave journalists. We really hope that Abdullah El-Shamy, Peter Greste, Mohammed Fahmy and Baher Mohamed are released soon.

Meet the Best in Beauty! Scoop on the 1st Makeup In Nigeria Conference

US Conservative Criticised for “Blacks are Better Off as Slaves” Statement