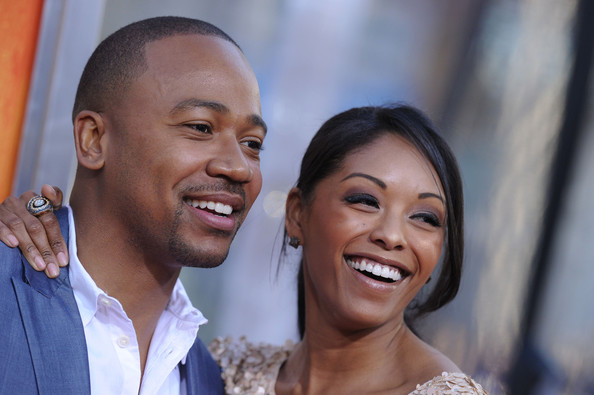 Scandal actor Columbus Short is making the headlines once again. Last month, Short, who plays Harrison Wright on the hit ABC series engaged in a brawl with a man at a restaurant. He was later released after posting a $50,000 bail.

We know he brings a little bit of cuckoo on the show, but this new report takes cray-cray to another level.

According to TMZ, his wife, Tuere Short has filed for divorce for allegedly putting a knife to her throat last week. Tuere claims Columbus threatened to kill her and himself.

A restraining order indicates that he came into her room with a bottle of wine and acted like he was going to hit her with the bottle and pour the content on her.

He later ran into the kitchen for a knife, pinned her to the couch and began choking her. He also told her that they should play a game called “Truth or Truth”, if she lied he would stab her in the leg.

Tuere says that she then named men he believed she was having affairs with. After denying all the affairs, he put the knife of her throat and threatened to kill her and then commit suicide.

She claims she tried escaping but he slashed her tyre. Tuere cites irreconcilable differences and asking for full custody of their 2-year old daughter in the divorce papers

Shonda Rhimes, the creator of Scandal, reportedly also had a sit down with him and threatened to fire him off the show, if he doesn’t get his act together.