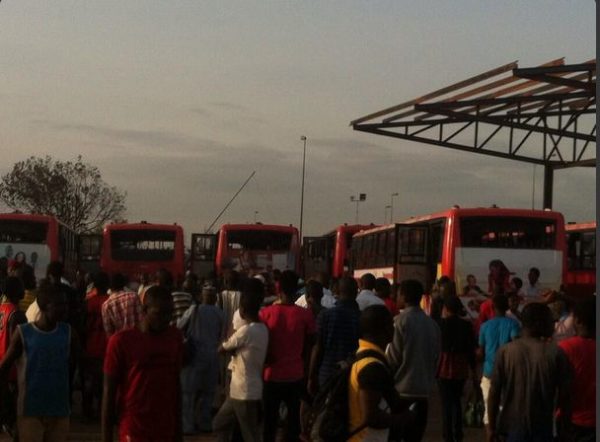 It’s with deep sadness that we report the news just reaching us from the Federal Capital Territory. About an hour ago, a bomb went off at the Nyanya bus park. This is very tragic, especially because that garage is always very busy at this time of the day. A lot of people who work within Abuja town work in the satellite towns. Nyanya is one of those places.

We don’t have confirmed reports at the moment, but here are some tweets showing the events.

Breaking news : just heard a loud blast which is confirmed to be a bomb blast at Nyanya in Abuja — PH3MMIE (@PH3MMIE) April 14, 2014

About 50 people confirmed dead this morning after the bomb blast !!! Security operatives at the scene — PH3MMIE (@PH3MMIE) April 14, 2014

We’re indeed sad. When will all this end?

Blown to pieces, just like that and they are still playing politics with people’s lives. — Reallionairé (@RicDizZLe) April 14, 2014

If you know the Nyana park, you will realise that if that was the target on a Monday morning, they were aiming for maximum fatalities. Sick.

What is wrong with Nigeria?

That blast did not discriminate against Muslims or Christians. We’ve got to unite as a people to defeat these creatures.
— Stanley Azuakola (@stanleyazuakola) April 14, 2014

This is truly sad. Our condolences go to all the family and friends of those whose lives were lost this morning. They were just going about their regular Monday hustle. 🙁

“I Scored 17 in JAMB”, Timaya Reveals Why Education is Not for Him