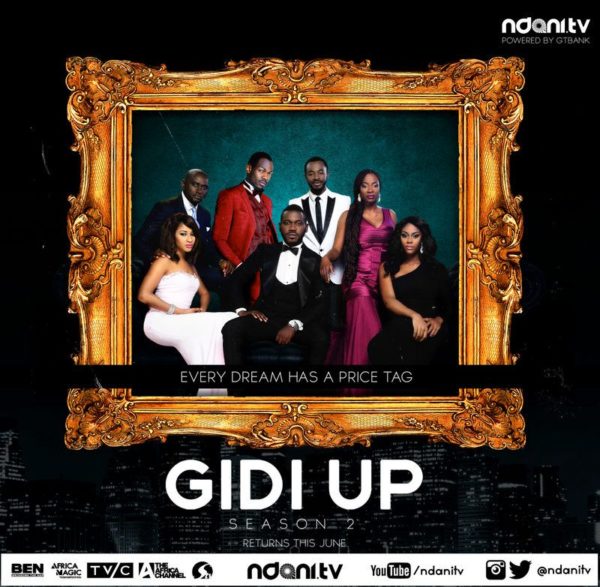 The second season of Ndani TV‘s hit web series – Gidi Up has premiered.

For starters, Gidi Up is a thrilling adventure centered around the lives of four friends in pursuit of happiness, success and independence. However, a few wrong choices quickly turn their Lagos dreams into a Gidi nightmare.

Episode 1 – To Techserve
The group sends forth Dereick as he relocates to Port Harcourt and Tokunbo’s friend – Charles – throws him a dinner party to celebrate the funding for his start up. Najite Dede is a guest star.

Episode 2 – Bad Decisions
The 2nd episode sees the group deal with the possibility of losing one of their friends forever as he is rushed to the hospital by a good Samaritan and is in critical condition.

Tokunbo has lunch with his mother and their conversation gets very heated and Yvonne is made a very tempting offer by Sharon. Guests stars include Joke Silva, Iretiola Doyle, Najite Dede

Episode 4 – She’s Not You
Obi’s meeting with Illa, the woman who rescued him and paid his medical bills, takes an interesting turn. Tokunbo has a surprise visitor. Yvonne and Sharon begin to work on their business as it begins to dawn on Yvonne that she may made a deal with the devil.

Episode 5 – Catch And Release
Eki finally sees Tokunbo as they run into each other at a beach party. Monye demands that Obi sees her as the woman that she is and no longer as a little sister. Meka, Sharon and Yvonne have a very awkward moment. Eki realizes she has big news.