“Think Like A Man Too” actress Megan Good is on the cover of Rolling Out Magazine.

In the publication, she gets candid about being sexy, criticism, her faith, her marriage and independence.

If you recall, Megan recently spoke about waiting until she and her husband DeVon Franklin got married before being intimate.
Read excerpts from the issue;
On criticism aimed at black actresses who play racy characters: “If Angelina Jolie goes topless, everyone goes ‘Wow, she’s so badass, so committed to her craft,’ but if Halle Berry goes topless, everyone’s like ‘She’s a slut. She probably took a bunch of money to do that.’ People attack her with unsavory names. And it’s unfortunate. Halle is one my favorite actresses — I’ve looked up to her since I began this journey. There’s definitely a double standard but I can’t put my finger on exactly why that is. If someone is telling a story, they should go to whatever extent that they’re comfortable with to tell the story. Whatever they feel is necessary.”

On going nude in movies: “I have no problem with nudity — it just has to not be exploitative and it has to be important to tell the story. It depends on the script, the character, the story, the tone of the movie — all of those things. I commend women of every nationality that are bold enough to tell a story in a way that’s fearless. I just haven’t found a project where I felt it was necessary to do that. The scenes I’ve come across seemed exploitative and I just didn’t do it.”

My faith is everything to me, but I’m also extremely liberal and I believe in telling real people stories. If you’re always trying to be this perfect character in everything, how can you be inspiring and do anything interesting? I like playing complicated characters who sometimes make bad choices. I like playing characters that do something questionable and ultimately the repercussions of their choices are kind of the lesson of the story. It’s just that, once in a while, there’s an extreme amount of nudity or the way that they’re talking about God and or the way that they’re dealing with something specific, [and] I’m like ‘Yeah, I don’t want to do that.’ But every time I say ‘no,’ it leads to something better for me.” 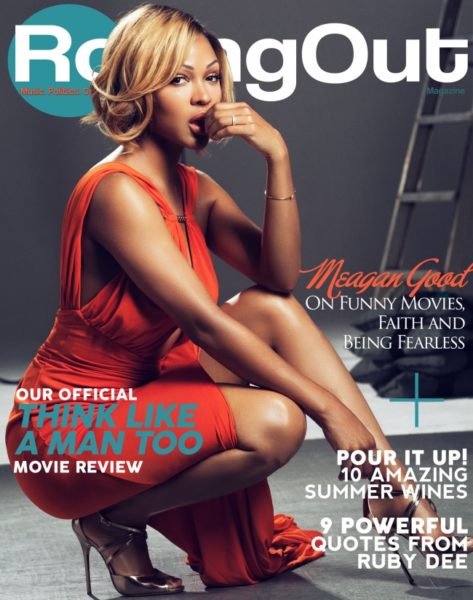 On being referred to as a sexy symbol: “I really don’t think there’s anything wrong with being sexy. God created our bodies as women. He created us to be beautiful, to be sexy, to be powerful, to be fearless — to be amazing. I do respect and understand the fact that when you come into the sanctuary, you need to be dressed appropriately because you are not the star — Jesus is the star. That I agree with 100 percent.

‘Appropriately’ is in each person’s own heart and each person’s own mind. When you speak to me about ‘appropriately,’ you’re talking about a girl who, at 9 years old, was getting completely naked and dressed around a bunch of drag queens. So my upbringing and my experiences as an actress my entire life and the liberalness of my childhood and surroundings, [that shapes] my opinion of ‘appropriate.’ “

On marriage: “Marriage has taught me that it’s OK to let somebody take care of me. That it’s OK to depend on somebody. I grew up being responsible for a lot of things — since I was 15 [I was] taking care of a lot of people. My father is amazing, but he wasn’t in the home, so my mother raised us with the mentality of not needing anybody. We were never the girls that went after the guy that had the money because we were taught to have our own money. I’ve always been extremely independent to the point where it probably intimidated some guys. Now, it’s nice to just feel like it’s not a bad thing to trust someone to have your best interest at heart.

His acceptance of me has allowed me to grow in areas where I was struggling in the past because I felt so unaccepted. I was angry, and that anger created a rebellious spirit that didn’t really want to change. Because it needed to be accepted first, before it could even consider being better. Marriage has made me better, assured me, made me happier; I’m way more at peace. I feel like I’m consistently growing into a better person and I feel like I can help him grow into a better person. He sees all the positive things in me that I felt like a lot of other people didn’t see — I always felt very judged. I always felt like people were coming for me. He was the first person, outside of my sister or mother, who said ‘I see you. I see who you really are.’ “

On being she and DeVon being celibate before marriage: “It’s very clear in the [Ten] Commandments that you shouldn’t have sex before marriage. And to me, you can’t change the perception of that by saying ‘Oh, I’m going to marry this guy one day, so technically that’s my husband-in-spirit, so we can have sex now’. To me, that’s taking away from the Word.”

On moral, relationship with Faith and God: “I feel like religion can get very judgmental and a lot of people don’t approach you with love. I try to be conscious of the responsibility I have as a Christian, but if I did everything everyone told me to do or tried to please everyone, I couldn’t have my hair a particular way, I couldn’t wear certain clothes, I couldn’t play certain characters, I can’t hang out with certain people, can’t wear a certain amount of makeup — and you can’t let people run your life. You have to look to God. People will fall in line.”