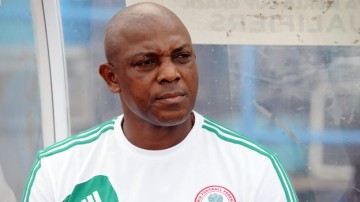 After the Nigeria v. Iran match yesterday which ended in a scoreless draw, many of Super Eagles’ fans expressed displeasure about the game’s outcome.

Stephen Keshi, coach of the Super Eagles says the team performed below expectations due to tension, anxiety and frustration, Punch reports.

“We had all expected to wrap up the game within the first 20 minutes, but tension, anxiety and frustration combined to adversely affect the team.

But you know this is football. It is not the end of the World Cup; the boys had tried to score goals many times and their failure to secure early goals must have led to anxiety.

We will give our best in the two matches left. I tried to offer advice to the boys at the end of the first half, but you know I cannot jump into the field to play for them because that will not be possible.

The boys made their promises but did not quite get over it,” he said.

Mikel Obi, defensive midfielder for the team also spoke about the issue, reportedly stating that, “We still have two games to go. We have to get back and correct our mistakes. They (Iranians) came out to frustrate us.’’

Maths Genius Hallowed Olaoluwa gets Ph.D from UNILAG at 24