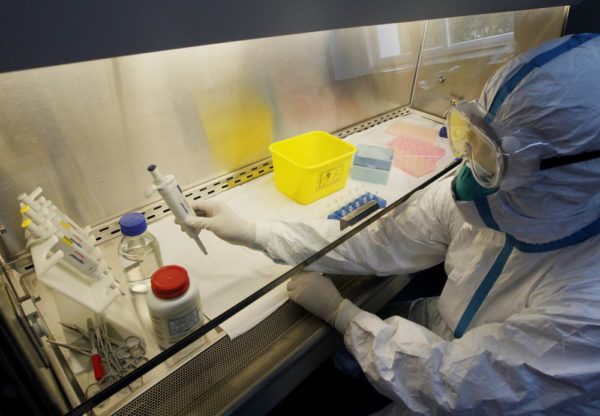 Asaba (NAN) ─ Gov. Emmanuel Uduaghan of Delta has announced the designation of seven hospitals as isolation centres for identified cases of Ebola disease in the state.

Speaking at a meeting of the People’s Democratic Party (PDP) stakeholders in the Delta North and Delta South senatorial zones in Asaba, the governor said there was no case of Ebola in the state.

“We have designated seven hospitals in the state as isolation centres where any suspected case will be managed.

“Every local government area has a contact person and there is a contact phone number – 32815 – where messages (SMS) can be sent to report any suspected case in the state,’’ Uduaghan said.

Uduaghan said the government had also set up a committee to educate and sensitize the people about the prevention and management of the virus.

He said the committee, which comprised the commissioners in the ministries of health, information and environment, had been inaugurated and would brief the people about the measures already taken to ensure that the virus did not get into the state.

“There is no Ebola virus in Delta State and it will not come to the state. We are doing everything possible to deal with the scourge.

“We have set up an inter-ministerial committee comprising the commissioners for health, environment and information to sensitize and brief the people on the measures in place to tackle any outbreak in the state,’’ said the governor.

He urged politicians to take the message to the nooks and crannies of the local government areas in the state to sensitize the people on how to maintain personal hygiene and to regularly wash their hands.

The governor also cautioned those who had relatives in any of the West African countries where Ebola had been reported and who needed to bring in any corpse from there to alert the state to ascertain the cause of death.

On the stakeholders meeting, Uduaghan said it was called to resolve various issues surrounding the forthcoming local government primaries, and to ensure that the elections were peaceful and violence-free.

He appealed to the aspirants to shun all forms of violence and ensure peaceful primaries and election in the state.

“It is only the PDP aspirants that you can see now moving around the state seeking support for the local government election and when they win, people will come up to contest their success.

“We are working hard now and l know we will win,” he added.

Uduaghan also reminded the stakeholders that the Independent National Electoral Commission (INEC) would commence distribution of the permanent voter cards on Aug. 15 in all the polling units in the state.

He enjoined them to mobilise their people at the grassroots to collect the cards to enable them vote in the forthcoming elections and subsequent ones.

Similarly, the Lagos University Teaching Hospital (LUTH), Idi-Araba, on Thursday began the training of its health workers to curtail the possible spread of Ebola virus.

Hope Nwololo, the LUTH Public Relations Officer (PRO) said: “Health workers are occupationally exposed to a variety of infection in the performance of their duties.

“The training is to promote the health and safety of all the health workers against the deadly virus.

“The training maps out the standard precautionary measures health workers are expected to observe in the control of infectious diseases and awareness on the risk factors of Ebola.

“We are all encouraged to apply, in addition to standard precautions, other infection control measures and strategies on proper and prompt response in the occurrence of an Ebola case,” she said.

Nwololo said that the training would include all employees of the institutions from the doctors to the administrative personnel and the cleaning crew.

“The delivery of healthcare services requires a broad range of workers such as physicians, nurses, technicians, clinical laboratory workers, security and administrative personnel.’’

Also in Sokoto, the former chairman of Shagari local government council, Alhaji Abdullahi Maigwandu, called for full participation of traditional rulers in sensitizing the people on the dos and don’ts against the deadly Ebola virus in the country.

Maigwandu said that the involvement of the royal fathers would go a long way in mobilizing the people to work towards preventing the spread of the virus in the society.

He said that there was urgent need for the people to be proactive in taking preventive measures against the disease.

He also called for active participation of the mass media in sensitizing the people on the dangers involved in eating “bush meat”.

Maigwandu urged media organisations to adopt an elaborate public enlightenment strategy on preventive measures to be taken against the spread of the epidemic.

He said that the campaign would enable Nigerians observe the dos and don’ts against the spread of the scourge in the country.

He explained that it was only by so doing that, Nigerians would complement the effort of the Federal Government in preventing the epidemic before it got out of control.

He advised residents against indiscriminate consumption of bush meat considering the dangers involved.

Maigwandu said that the scale of Ebola outbreak and the persistent threat it pose required a holistic sensitization among Nigerians, especially rural dwellers.

He explained that massive awareness drive would go a long way in preventing the spread of the virus.