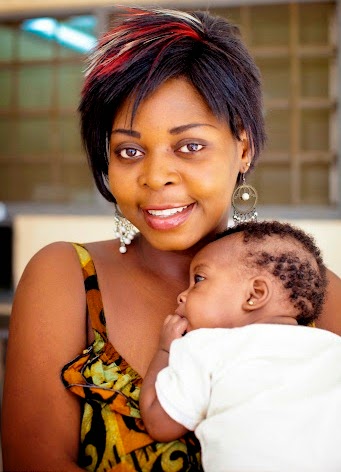 In 2007, Joyce Dzidzor Nartey had unprotected sex with a member of her church. A few weeks later, she found out she was pregnant and HIV positive.

The news was devastating at the time, but the Ghanaian singer and actress came out brave. She found true love, and is now an awareness advocate for HIV/Aids.

In an interview with Vanguard, she details her story.
Read excerpts;
On living with HIV: “I have lived with HIV/AIDS virus for seven years now. I contacted the disease in 2007. But I’m just a normal person. When people meet me and tend to find out how I’m feeling, I always tell them I’m a normal person.

As a matter of fact, I visited a school to educate the students. After talking to them they were keen to test for HIV. I also joined the queue and got tested but it was negative. It means one must stay with one’s medication forever. Regular medication can make it read that way. It doesn’t mean such a person is no longer a carrier.”

On contracting the virus: “I contacted the disease in 2007, through a member of my church. I was to spend a night with him in his house. When he removed his clothes, I saw some kind of rashes all over his body. I was terrified, as I innocently asked him why he was like that.

He covered up, saying it was a minor skin infection and that it was nothing serious. But when he wanted to make love to me, I insisted that he must used condom. He told me that he didn’t like using condom.

However, when I insisted, he agreed but he never used it. He removed it while entering into me. We did it several times that night. After few weeks, I became pregnant for him. When I told him, I was pregnant, he advised me to abort the baby. But I refused, insisting on keeping the baby.

He later warned me that if insisted, I would have myself to blame in future. I never knew what he meant until I was diagnosed HIV positive. He also infected other ladies in the church before he died.”

On being an awareness advocate for HIV/Aids: “I was driven by the need to help other carriers of the HIV/AIDS virus. This is because most AIDS patients are brought to the hospital when they are almost dead. Victims find it difficult to undergo medical test to determine their HIV/AIDS status.

I realised when people get to know about their HIV status at the early stages and they are put on medication, they wouldn’t die. They would live their normal lives. So, I decided to use myself as an example. That was what motivated me to begin the campaign against HIV/AIDS virus.”

On her husband: “Before we got married, my husband was educated about the deadly disease. But he is also a carrier of the disease. At the moment, medically both of us are negative to HIV virus. This is because we have been put on medication for long.

So, HIV positive man who is on medication can share sexual activity with an HIV negative woman, and they both can produce an HIV negative baby. You can see that there is life after contacting the HIV virus.

On married life: “Marriage for me was normal but they say, in every marriage there are challenges. Things have happened in the past which I wouldn’t want to talk about here. Talking about the stigma, there was one day, my seven-year old son came from school and told me to stop that HIV thing that I am doing. According to him, his friends said, they wouldn’t play with him because his mum is HIV positive. There are challenges but life must go on.”