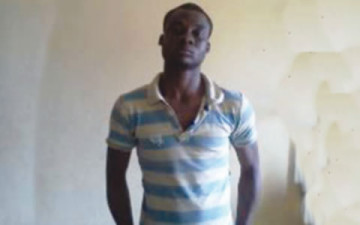 He was arraigned on one count murder.

In July, the 300 level History and International Relations student of the tertiary institution, stabbed his father to death with a knife and later butchered him with a cutlass

“My father went to the kitchen and got a stick (wooden spoon) which he used on me repeatedly and I tried to defend myself. Then, he bit me on the shoulder and I got angry.

I initially used a normal small kitchen knife. Later, I used cutlass to attack him.” he said at the time.

Tolani has been remanded in custody pending the advice from the Director Public Prosecutions. The case has been adjourned till the 10th of October 2014.