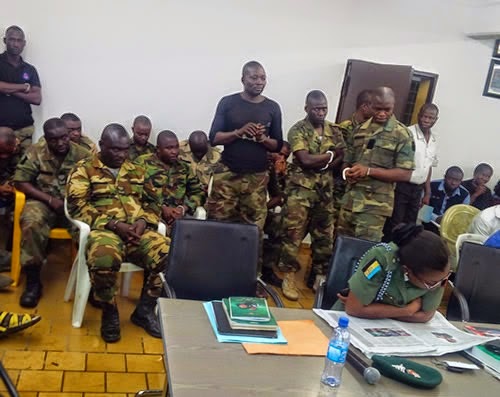 The Maiduguri soldiers who opened fire on their own commander, Major General Ahmadu Mohammed, in May, have been sentenced to death.

You will recall that the soldiers were unhappy because their commander allegedly has not provided them with adequate weapons to fight the war against Boko Haram militants.

News Agency of Nigeria (NAN) reports that a court-martial in Abuja on Tuesday sentenced 12 soldiers to death by firing squad for mutiny.

The court, which handed the judgment at 1:35 a.m, also handed a one-month jail sentence on a soldier and freed five others.

The President of the Court, C.C. Okonkwo, while announcing the sentences, however, said that the decisions were subject to “confirmation’’.

Eighteen soldiers were arraigned on a six-court charge bordering on inciting mutiny against the GOC, 7 Division, Maimalari Barracks in Maiduguri, Maj-Gen. Ahmed Mohammed, on May 14.

While five of the accused were discharged and acquitted,  Ichocho Jeremiah was sentenced to 28 days imprisonment with hard labour for being absent without official leave.

The 12 condemned men were found guilty of munity, which attracts death by firing squad, and also sentenced to life in jail for criminal conspiracy and attempt to commit murder.