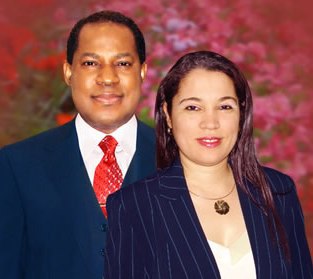 Anita is said to be filing for divorce on grounds of “adultery and unreasonable behaviour.” According to reports, the divorce case with Suit No FD14D01650, was filed on April 9, 2014 at Divorce Section A, Central Family Court, First Avenue House, High Holborn, London, UK.

For a long while, Pastor Chris remained mum on the issue. But now, he is breaking his silence, and has described the divorce allegations as “frivolous charges,” Punch reports.

Oyakhilome is said to have stated the following during a sermon he gave at his church on Sunday:

“You don’t know who a man of God is. I don’t go in that direction. I wasn’t accused of the things you said, nor did I commit those stupid things that you said and I don’t need to go into that level in such discussions. Jesus Christ was accused by many – a lot of frivolous charges. There will always be those who would like for it to be true. But you know, in spite of the accusations against Jesus, it didn’t change who he was. It didn’t change him.

There are preachers and there are men of God. I am not a preacher; I am a man of God and I go in the way I’m asked to go. It may cause some troubles with individuals but that’s not because I have done something wrong and when it comes to Reverend Anita, what I will say to you is ‘pray for her’…

Don’t act like those people. If you are married to a man of God, it doesn’t make you automatically mature. You can make mistakes; you can do something that is wrong. But some people expect the wife of a minister to definitely be at the level of that minister and so they may be looked upon and the expectation may be like that, but it’s a positional thing.

If a man of God is married, it doesn’t automatically mean that the wife of a man of God is therefore a woman of God. That’s not the way it is in the Bible. That’s why you don’t really find the wives of men of God mentioned in the Bible. How many of them? Who was Peter’s wife, did you ever know her name? You never find that out. Who was John’s wife? Did you ever read the name? What about all the other Apostles? How many of their names are written in the Bible. You never find their names.”

The only things you might find will be a man of God, maybe in two different kinds of ways. Moses, for example; when he struck the rock twice, [he] was provoked by the anger of the people. [It was] not because he wanted to do something against the Lord.

No man of God does something against the Lord. Are you hearing me? A man of God is set on a course; there is a type of life that he is given. Then you have a young man, a young prophet; he wasn’t named; he was deceived by another man of God and so he went in a direction that God said ‘don’t go’.”

Ebola: Liberia to See Thousands of New Cases in Coming Weeks – WHO