It Was all Beauty, Colour & Love at Nana & Naa Dromo's Wedding in Ghana

If there’s anything we’ve learned at BN Weddings this week, it’s you can find love when you least expect it on the internet!

Foluso (@yoursfashionably) is a designer and she made all her outfits for the shoot. Tunde is a writer – he writes fiction on his blog tlsplace.wordpress.com, and has a self-published novel, Golden Sands. He also sings.

We’re going to leave it to Foluso and Tunde to tell the funny and sweet love story.

Tunde: “When something is made for you, every detail fits perfectly.”
On the 20th of September, God willing, I’d be marrying this beautiful girl I met on Twitter! She’s a fashion designer and definitely the one for me.

Foluso: “From fans to friends to future partners”
How We Met
I first knew of Tunde in April 2012 when my cousin had sent me a link to his blog, (they were friends from church). It was his debut online series ‘Finding Hubby’. I fell in love with his writing moreso, it was a very relatable story, but since I’m not an avid reader, I stopped going to the blog when the story ended.

Then in December finally, after that same cousin of mine had given me a thousand reasons to join Twitter, I found one more – I was going on there to get first hand info about my Ex. And then I found Tunde Leye, I’m like “oh the writer!”. So I started following him. 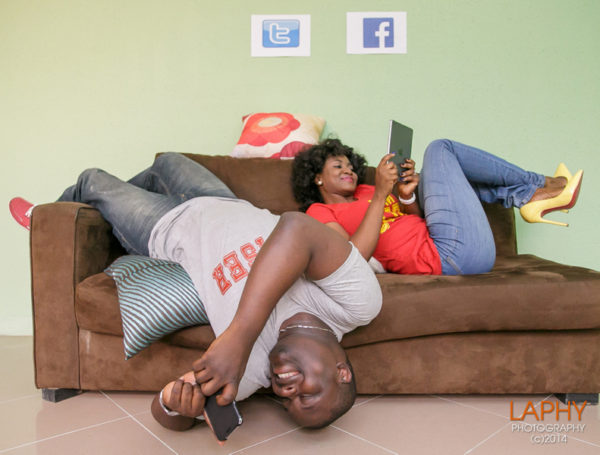 One afternoon, late April 2013, he had tweeted about bad network, hence was in an awkward position in another room in his apartment.

I replied the tweet saying that I was also in the same position in my brother’s room for the same reason. So he responded asking if I was a cousin of Tinu George’s having seen my name, I answered in the affirmative and that was how we got talking. 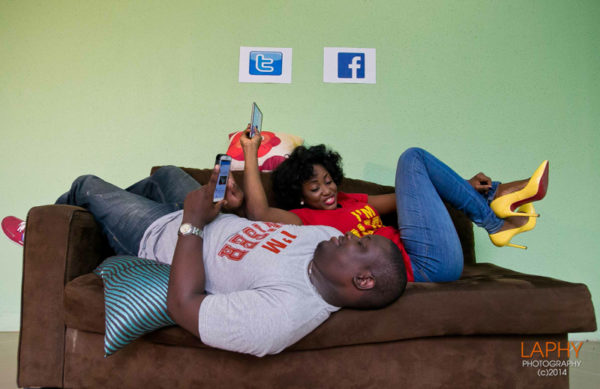 He said immediately (as though he had been waiting for the opportunity) that he’d plan a meeting soon and within three weeks of chatting everyday, we met on May 12 at La Mango, GRA Ikeja.

1. I like that I found him when I wasn’t even looking, even when he and my cousin were friends, we never got introduced and things just played out on their own.

2. There was ‘no long thing’. On our first date, He told me straight up he wanted something really serious. And that was well understood because from our chats he had identified the difference between ‘dating’ and dating seriously.

The Proposal
by Foluso
It happened on the afternoon of Saturday March 15th, it was two weeks to my 30th birthday. 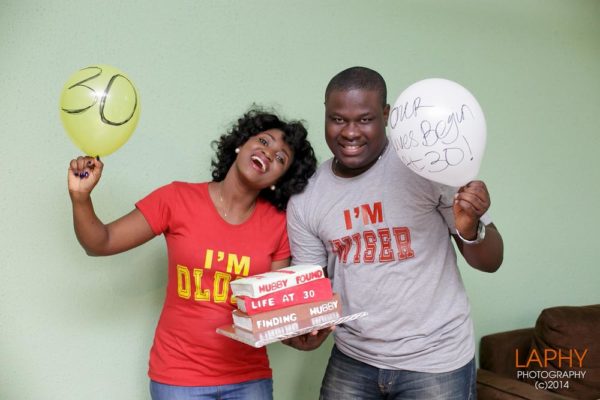 I was home relaxing although in the midst of workmen because my mum was remodelling the house, mostly for our introduction scheduled for Easter Monday, wedding plans were in the works so I knew a proposal was coming soon but I really thought he’d make it a birthday something.

That’s why when he showed up, I didn’t suspect anything. Naturally we just started chatting about the introduction party. I had mentioned that I hadn’t told my friends yet since he hadn’t proposed officially and in that instance, he got up and said I should come to my studio to give him the books (that I had borrowed from him for a shoot). 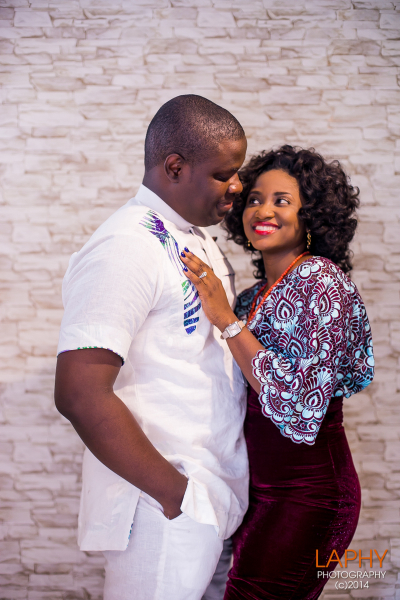 I was wondering ‘cos he had come many weekends after the shoot and I had told him to sort out his books but he didn’t listen. Well, I followed moments after and typically, I continued with what I was saying about not having told my friends since he didn’t respond and was seemingly engrossed with his books. Then he justed started laughing and I’m like “what’s funny?”, then he goes “you’ve not told your friends about our introduction and you still don’t have a ring on your finger…awwww”, raising my hand and really laughing.

I moved away from him forming sulking since he was making fun of me. Then he pulled me to himself and said “oya sorry lemme sing for you”. I’m like, “I don’t want to hear any song”, rolling my eyes in my mind- “wetin concern singing for this matter now?” He said he was serious as I sometimes ask him to sing, so I said ok. He held me close with my head on his shoulder and started singing Luther Vandross’ ‘Dance With My Father’ whilst stroking my hair and kissing my face, did the last verse in his own words “…I would love to be your husband as long as I live. Now I’m going on my knees…” 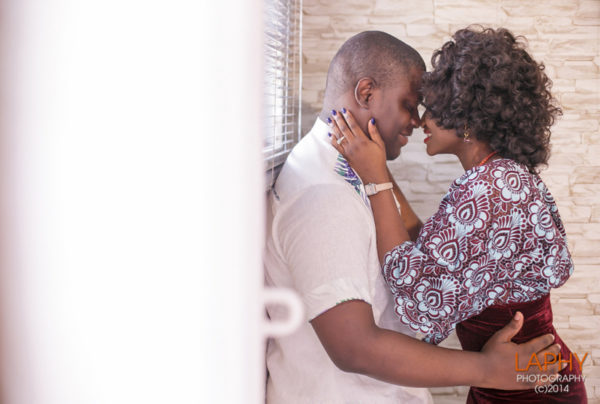 and it was in that moment I saw the opened box with the ring in front of me, it happened so fast I didn’t know where it came from. Then he went on one knee and slid it on my finger. I was too surprised to talk.

What I Like About Our Proposal
Even though I was expecting a more dramatic proposal knowing the kind of things he writes about, I ended up loving the way it turned out- more private and intimate.

Tunde’s Story
How We Met
I had known about Foluso for about a year before we first talked. Like destiny, different people in different areas of my life knew her closely, but we had never met.

First, her cousin Tinu was my very good friend from the church I grew up going to and she always talked about going to Foluso’s house. I had even seen pictures of her and thought, all these fine girls sha. ‘Take one’, I didn’t listen to the nudging.

Then one of my colleagues grew up with her. I was very good friends with this colleague and I had seen Foluso on her DP a couple of times as well. ‘Take two’, I still didn’t listen.

Then I discovered she was very close friends with a friend’s cousin. We talked about her, but I still didn’t hear.

Thankfully, in spite of my ‘non-hearing’, social media brought her to me. Like a blessing in disguise, MTN’s epileptic network led me to tweet about it. She responded, and all the previous bells rang in my head. So began three weeks of chatting non-stop. By the time we met at La Mango, I knew it was her and I asked her out. So, my writing brought me my wife. 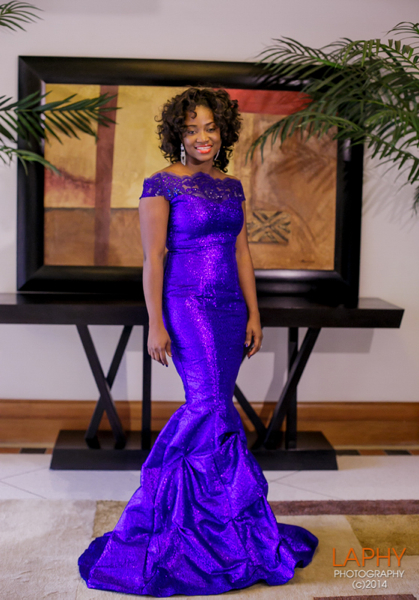 The Proposal
I knew she was expecting it either on Val’s Day or her birthday which was a little over a month after. She was working on Val’s Day on a bride’s wedding dress though so we didn’t see. I had planned to do the proposal rather dramatically at a Karaoke Bar, but that didn’t quite work out. Foluso is very hard to surprise, so I decided to ensure I did. Our parents had already met and we had fixed Intro date by then so she was watching for the proposal. 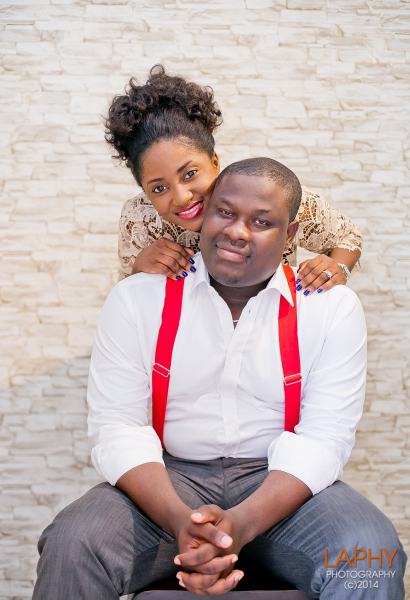 That Saturday, I planned everything down to my clothes. Just tees and linen pants (so it could hide the ring in my pocket), I got to her house. Workmen were everywhere except her workshop, so I knew that was the only place I could do it. As we got talking about the intro, she began talking about how when her friends asked her about proposal, she would just look like, “ehn, he hasn’t done it yet”. Inside, I was laughing. So I would not burst out laughing there, I went into her workshop.

When I called her to come and sort my books (I loaned them to her for a photoshoot) she gave me a “look” and came to the workshop still chatting away. I couldn’t help it any longer, I burst out laughing and I could see she was getting pissed. So I asked to do a song and then I proposed.

Advice for Single Guys
1. If you see what you want, don’t dilly dally; go for it.
2. Don’t let ghosts of the past haunt your current relationship. I’d been single from a nasty break up for three years when we met. I didn’t allow the experience affect our relationship.
3. Answer your DMs. NICELY 🙂

Foluso and Tunde played on their professions and played out their love story in their pre-wedding shoot.

In the photo story, Tunde the writer tried to get her attention with his writing and sends her copies of his novel. She in turn, showing off her skills, makes a paper dress out of the book. After they become a couple, he sings for her. 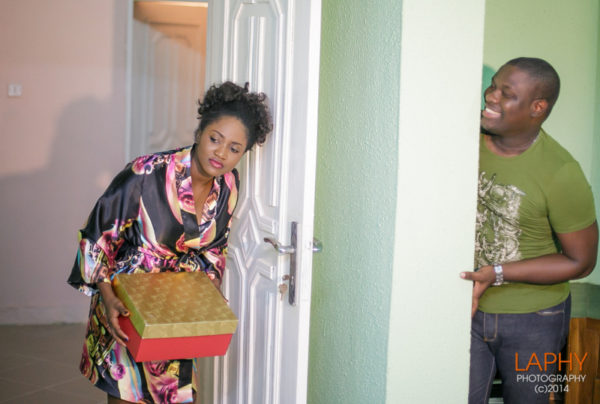 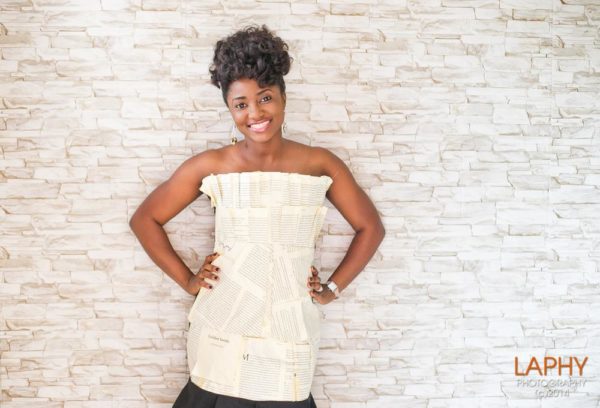 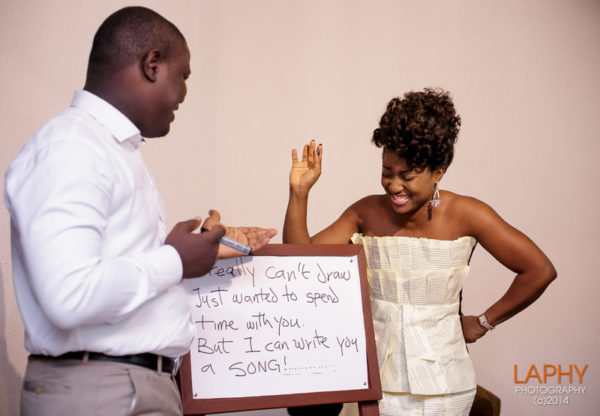