The city of Lagos is set to experience the annual Lagos Jazz Series this month of November!

In the Lagos Jazz Series (LJS) tradition of offering world class music festival in Nigeria, organizers of the festival have unveiled the artistes performing at this year’s edition taking place next weekend, from the 28th to 30th November, 2014 and will hold at two separate venues – Muri Okunola Park and Federal Palace Hotel, Victoria Island, Lagos. 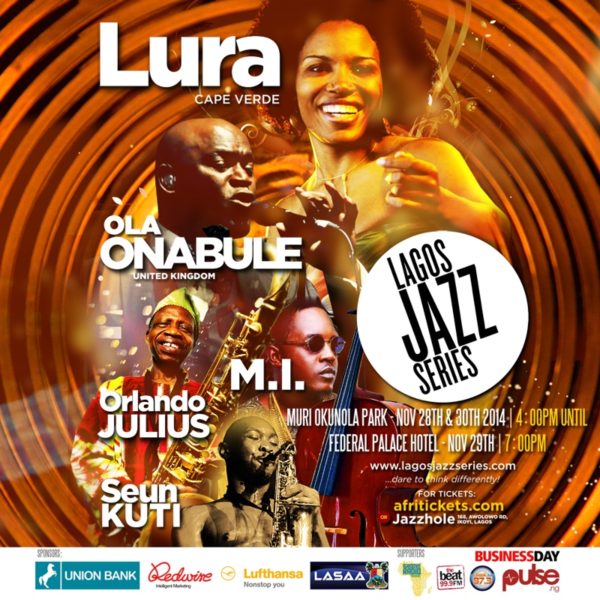 Also billed to perform at the Muri Okunola Park are the “Jos Boyz” crew that includes artistes such as The Chairman himself – M.I Abaga, Jesse Jagz, Ruby Gyang, etc.

Soul singer and Cape Verde beauty, Lura will be headlining the Federal Palace Venue. She will be performing hit songs from her 5 studio albums released in a career spanning almost two decades. Lura has performed at sold-out concerts in Europe, USA and Asia. Also performing at the Federal Palace venue is AfroBeat sensation – Seun Kuti who has just returned from a successful world tour… and guess what? He saved the best for his home audience.

“Lagosians should prepare for an experience of a lifetime! We have put together a fresh blend of artistes from Jazz, Soul, Hip-Hop, and Highlife. This year’s event promises to be a thrilling feat as guests would be treated to hours of snazzy, world class performances.” – Oti Bazunu, founder and jazz aficionado added.

Since 2010, the festival has featured some of the biggest names both in the international scene and home-grown artistes including Bob James with ForePlay, Marcus Miller, EFYA, Hugh Masekela, Roy Hargrove, Olamide, Tiwa Savage, Burna Boy, 9ice, and many more, and this edition is set to be the biggest yet.

Tickets to the events are already on sale on afritickets.com and at Jazz Hole, Awolowo Road, Ikoyi, Lagos.

Discover More at Lost in Lagos LIVE this November!