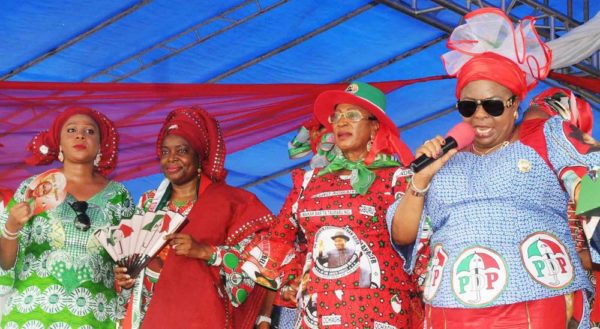 First Lady Patience Jonathan on Wednesday at a campaign rally in Ibadan, Oyo State, stated that APC was planning to send her to prison, and invoked “Holy Ghost Fire” to prevail.

Here is what she said, according to Punch:

“I want to warn you not to listen to the All Progressives Congress. The APC does not have materials to match what the PDP has on (the) ground. Their candidate was there in governance initially. What did he do? They only sent your fathers to prison.

A train is moving and it has now got to Oyo State. When we talk about train, some of you may have not seen a train before now. The last time a train moved in this country was when I was small and in primary school.

When my children were small, they asked me what a train was. I had to take them to London and we entered a train from London to Paris. But the PDP government has brought this back to Nigeria. If you want to see train working today, you don’t need to travel again…

I enjoin the women and youths of Oyo State to vote for our party on Saturday. I have seen a campaign advert by the APC in the newspapers saying ‘God give us men’. But our prayer in the PDP is different. We pray that God gives us men and women.

Jonathan is the first President in Nigeria to give women 35 per cent. Going by the National Conference report, the President has said that if women have 35 per cent, youths will also have 30 per cent.

I was looking at the list of the universities set up by this administration, and I saw that one of them was set up even in the hometown of his opponent – Gen. Buhari. I think that if Buhari could not set up a university in his own state, Jonathan has done it and, therefore, deserves to continue.”

Crowd at the PDP Women’s Rally in Ibadan

According to reports, the First Lady also entertained the crowd by dancing to Iyanya‘s Kukere, P-Square‘s Personally, and more.

Other dignitaries that attended the rally include the party’s senatorial candidates in Oyo State, Senator Teslim Folarin and his wife, Angela; and wife of Ondo State Governor, Kemi Mimiko.

Pastor Dies while Confessing his Adultery to Church Members