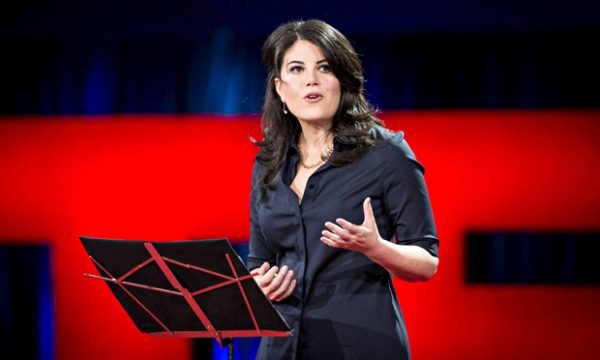 For Monica Lewinsky, 1998 is one year that will never be forgotten and in the TED talk which she delivered on the 19th of March 2015, she tells the world exactly why.

In her TED2015 talk titled ‘The Price of Shame’, the 41-year-old former White House intern advocates for a safer and more compassionate social media environment, drawing from her unique experiences at the epicenter of a media maelstrom in 1998 and opens up about the Bill Clinton scandal in ways she has never done so before.

She went on to say, ‘Not a day goes by that I am not reminded of my mistake, and I regret that mistake deeply. In 1998, after having been swept up in an improbable romance, I was then swept up into the eye of a political, legal, and media maelstrom like we had never seen before’

In the video Monica Lewinsky talks about how the internet changed her life…and changed media as we know it.

“Now, I admit I made mistakes—especially wearing that beret. But the attention and judgment that I received—not the story, but that I personally received—was unprecedented. I was branded as a tramp, tart, slut, whore, bimbo and, of course, ‘that woman.’ I was known by many, but actually known by few. I get it. It was easy to forget ‘that woman’ was dimensional and had a soul.”

“In 1998, I lost my reputation and my dignity… I lost my sense of self. When this happened to me, 17 years ago, there was no name for it. Now we call it cyber-bullying.”

“Public humiliation as a blood sport has to stop. We need to return to a long-held value of compassion and empathy… I’ve seen some very dark days in my life. It was empathy and compassion from friends, family, coworkers, even strangers that saved me. Empathy from one person can make a difference. Compassionate comments help abate the negativity.”

“Because it’s time. Time to stop tiptoeing around my past … Time to take back my narrative. Anyone who is suffering from shame and public humiliation needs to know one thing: you can survive it. I know it’s hard. It may not be painless, quick, or easy, but you can insist on a different ending to your story.”

Special Adviser to the President on Ethics & Moral Values: Indecent Dressing is a Cause of Rape