Pres. Jonathan: No One is Perfect...Forgive Me I Have Offended You 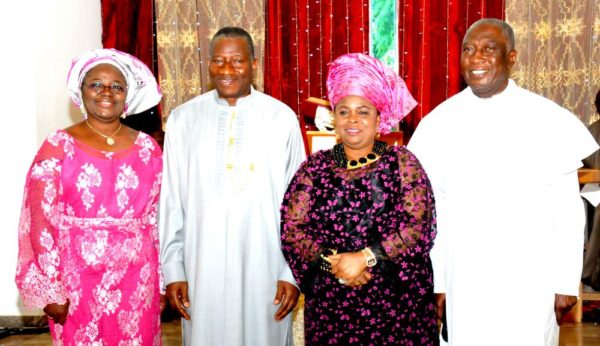 In a heartfelt farewell message, President Goodluck Jonathan admitted his imperfections, and asked for the forgiveness of all those whom his administration has offended.

He delivered the touching speech on Sunday at a special thanksgiving/farewell service held at Aso Villa Chapel, The Nation reports.

Here is an excerpt from his speech:

“No system is perfect. Every human system must have an element of imperfection. For the period of eight years that we have been here. I will take the period as a block because my transition from VP to President was gradual and complicated. It was intertwined so you cannot actually draw the line.

Because when the President was challenged within major health issues, I was running the country for sometimes even before the doctrine of necessity made me as acting president. Then I took over at first and conducting the 2011 election I won and I had to run my full four years as an elected president.

So for the eight that one has been there, definitely one is not perfect. We have certainly done things that probably we wouldn’t have done that way, but we didn’t do things deliberately. So for those who we have offended it was not deliberate, it was circumstances of the office.

So we also plead that those people should forgive, we think we have done our best. You can do your best and your friends may misunderstand you. Today we are talking about leaving, it is only God that knows why things go the way they do.

We came in as Vice President and my wife, today we are leaving as the former president and former First Lady. We have achieved it through you. Let me specifically thank the chaplain, the clergymen, the pastors and their wives.

For the past eight years we have every reason to be thankful to God. Every individual has his/her own calling. I also believe that people who take over political leadership have their own callings to do specific things. No one, head of a government, be it at the national level or the sub- regional levels can do every thing.

But when you leave, you will want to do something to show that yes I was here. The chaplain has said that nothing is perfect, if you wait for perfection, you cannot achieve anything.

Ordinarily 24th of May would haven been the last Service here. But that 24th, we will all go to the National Christian Centre for the inauguration service. So for me and my wife, this is our last day of worship here.

“Though we are leaving as president and First Lady, but we have not left you, because we are still in this country, we will continue to interact one way or the other, probably along the line we may even come closer. I believe some of you may even come closer, and even do more meaningful things together when we leave office.

I don’t really believe that it is only in government that you can do thing, even outside government you do a lot of things. The richest people in the world don’t even serve in government. 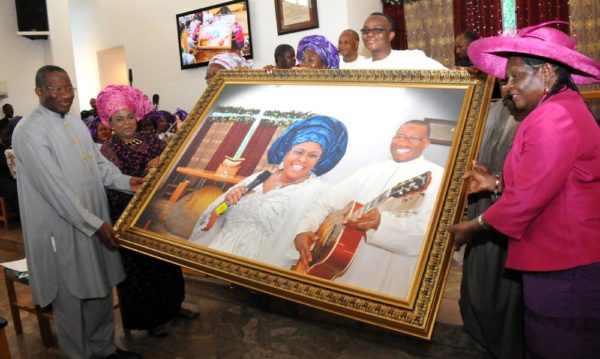 President Jonathan (L) & First Lady Dame Patience Jonathan receiving a souvenir from the
Chaplain, Aso Villa Chapel, and other members of the church committe during a special
thanksgiving church service by the First Family  at the Aso Villa Chapel in Abuja
on Sunday (17/5/15). 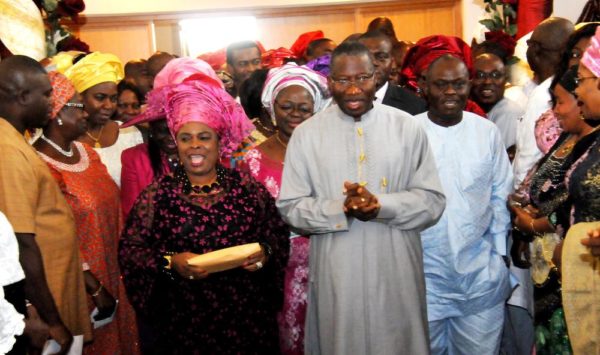