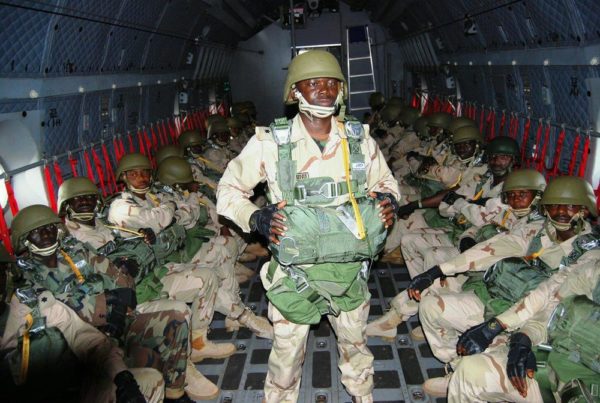 Everyone is still talking about the recently released Amnesty International report and video in which the organization alleged that the Nigerian army committed heinous war crimes in the course of the fight against Boko Haram.

The Nigerian army has released a statement denying the allegations, Premium Times reports:

The Defence Headquarters has noted with dismay the gruesome allegations made by the Amnesty International against some senior military officers serving and retired of the Nigerian Armed Forces.

It is unfortunate that all effort made in the allegation was geared towards continuation of blackmail against the military hierarchy in which the organisation had embarked upon as far back as the inception of military’s action against terrorist in the North East.

The officers mentioned in the report have no reason, whatsoever, to indulge in the allegation made against them. It is unfortunate that the organisation just went out to gather names of specified senior officers, in a calculated attempt to rubbish their reputation as well as the image of the military. The action, no doubt, depicts more of a premeditated indictment aimed at discrediting the country for whatever purpose.

Each of the previous allegations had been thoroughly responded to and cleared in the public and officially. The title down to the body of the allegation smacks of the extreme bias, which is disturbing coming from an otherwise reputable organisation that is expected to be just and fair to all. Unfortunately in this case, has taken a premeditated position, which is far from noble.

It is curious that a body that has never been able to seriously condemn terror in Nigeria now claims to have done an extensive research with the aim of discrediting the nation’s effort at curtailing terror.

It will be recalled that the Joint Investigation Team was set up by the Defence Headquarters as part and parcel of efforts to ensure that no detainee suffer unjustly. The detention facilities were thrown open for visits and inspections by independent bodies such as International Committee of the Red Cross and other reputable international organisations and personalities.

Amnesty International is advised to stop playing the role of an irritant coming up loudly only when the terrorists are losing out and remaining silent or complacent whenever the terrorist heightens its atrocities. It is unfair to persist in effort to discredit Nigerian military by seeking all avenues to stigmatise individual officers of the nation’s military purely to satisfy an agenda against the security agencies and image of Nigeria before the international community.

The Nigerian Armed Forces is quite conscious of the fact that the operation has prompted the need to save citizens from abuse of their rights by mindless terrorists. Accordingly, the forces have continued to state and restate its commitment to the rights of Nigerians and all its citizens while prosecuting its anti-terrorism campaign. It is very unfortunate that Amnesty International has chosen to ignore all the responses and clarifications provided to its enquires by the authorities.

It is unfair to rely on records or reports provided by certain disgruntled elements or faceless collaborators who have axe to grind with the system as evidence against officers who have been conscientiously doing their duty to defend the nation and her citizens.

For avoidance of doubt, the Nigerian military does not encourage or condone abuse of human rights neither will any proven case be left unpunished. The kind of impunity being alleged by Amnesty International has no place in the Nigerian military. Every officer in the field is responsible for his action and is duly held accountable. So far, no allegation has been sufficiently proved against those whom Amnesty International is so desperate to convict.

The statistics are largely spurious or manipulated to satisfy a clandestine motive. Indeed, the loud publicity given to these damning allegations suggests an intention to blackmail the military and particular senior officers rather than a sincere advice to the government. This cruel tendency is not new, despite the timing.

Photo Credit: www.beegeagle.wordpress.com (*Photo is for illustrative purposes only*)