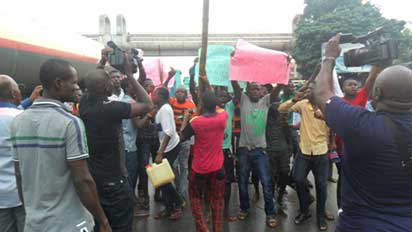 Earlier this week, residents and traders in Ekwulobia, Aguata Local Government Area of Anambra State, took to the streets to protest the alleged transfer of Boko Haram prisoners to Anambra prisons.

According to Vanguard, the prisons’ authorities stated that no plans are being made to accept the terrorists into their facilities, however; residents remained unconvinced.

Carrying placards with inscriptions such as “Ekwulobia town doesn’t need Boko Haram prisoners” “Please save our state from Boko Haram insurgents” “Why Ekwulobia of all the towns,  and Why Anambra State of all the states,” the residents expressed their displeasure.

‘’We have confirmed that the story of bringing Boko Haram detainees after our protest and closing of markets in Onitsha last Saturday is true, the detainees were said to have been sent on last Sunday night, the prison officials in Ekwulobia confirmed the story for us and we are not happy.

They are 49 detainees, they were brought on Sunda, June 28 night under tight security, our worry is that we will be having their friends visiting them in the prisons and they will be coming with all types of dangerous plans, before you know it we will be talking of jail breaks and if iit happens we are in trouble.“