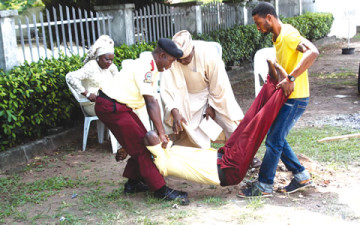 According to Punch, the deceased, Kazeem Lawal, was rushed to Lagos University Teaching Hospital (LUTH) when he collapsed. However, no one attended to him because of the ongoing strike action. He was then rushed to the Randle Hospital where he was confirmed dead.

According to one of Lawal’s colleagues:

His family members are in disarray at present. We work round the clock, and we are usually overwhelmed. He must have collapsed from accumulated stress.

Since the government sacked some LASTMA workers last year, there has been a burden on the workforce. Work posts, where seven personnel were handling, have been reduced to one or two.”

The whole thing happened so fast and so shocking. By the time they took him to the Randle Hospital, he had died.”

Get Fantastic Discounts of up to 80% off in the Jumia Summer Fashion Clearance Sale!

Win Fabulous Prizes in ‘The Repost JawDropping Contest’ on Instagram