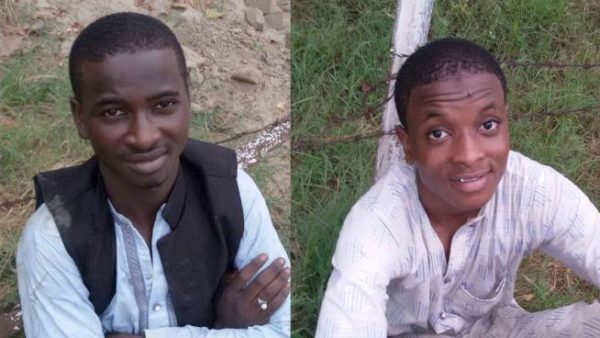 Attari: Nigerian nationals Sani Jamiliu (R) and Imran Kabeer (L) who were apprehended by BSF after they were spotted close to Indo-Pak border fence in Attari, on Aug 7, 2015. (Photo: IANS)

Two Nigerian students were recently arrested in Punjab recently while on their way to Pakistan, allegedly to join the ISIS terrorist group.

They are currently being detained by police in India, Punch reports.

Authorities stated that they arrest took place based on suspicions that the pair were on their way to join ISIS, after attempting to enter Pakistan without valid travel documents.

The two individuals are said to be from Kano. They are: Imran Kabeer and Sani Jamiliu.

The suspects, who live in New Delhi, came to India on student visas about a year ago. While Imran is pursuing a Bachelor of Arts degree at the Karnataka State Open University, Sani is a Bachelor of Science student of the Kerala-based Mahatma Gandhi University

The spokesman, Ministry of Foreign Affairs, Ogbole Ahmedu-Ode, confirmed that the Nigerian embassy officials had applied to see the suspects to “ascertain their claim of Nigerian nationality.”

“Our embassy in India has applied for consular access to see the boys so that we can ascertain their claim of Nigerian nationality,” he said.

Find out How you can Make your Dream Wedding Come True with Dunamis Events!