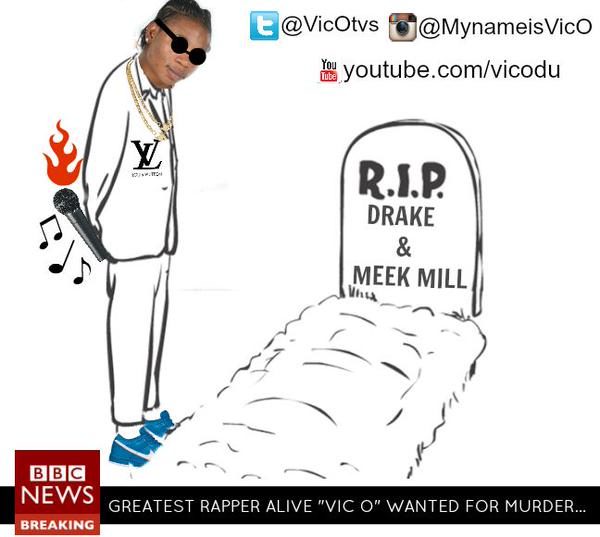 Does he need a lesson from the 6 god?

“After Party” crooner – Vic O promised to drop a diss track for Drake and Meek Mill that will crown him the ‘King of Hip-Hop‘.

ONCE THIS TWEET GETS 5000 RE-TWEETS, I WILL DROP MY DISS TRACK TO DRAKE & MEEK WHICH WILL CROWN ME KING OF HIP HOP! pic.twitter.com/HsaB2gyFWD

5000 retweets later, he premieres the “Diss Song” and Nigerian Twitter is buzzing about it!

Listen to the diss track and read some of the tweets below!

Hooked up with my man @VICOTVS he had this to say about the drake and meek mill beef. It's fire ??? pic.twitter.com/Jjgch2bIIJ

When @VICOTVS said ” I’m music,I kill the beat and give the fans to eat” pic.twitter.com/esIH7UoCbq

@VICOTVS VYou just dropped the greatest diss track ever. You’re among the greatest black mehn alive. After Mandela na you ????

#Barz “@Punthief: I could take a digital camera to Yaba left and snap every patient there and still mi o le ya werey to padi Vic O yi.”

No Nigerian Celebrity has gotten 5,000 retweets on Twitter except Vic. O.

Drake tweeted this and deleted it immediately. Vic O! pic.twitter.com/2CZYCmkEhQ

: When Vic o said I killed the beat and give it to my friends to eat pic.twitter.com/rL7CAvtlE3” @Mfon_I

I won’t even listen to VicO’s diss track, I know it will bang. My ears aren’t even worthy to listen to his great music.??

Let me introduce myself first, I’m VicO, the one and only. I’m from Nigeria Cross River State boy, Calabar Capital city iii e’er. ????

Rihanna Turns Up at Crop Over Festival in Barbados!