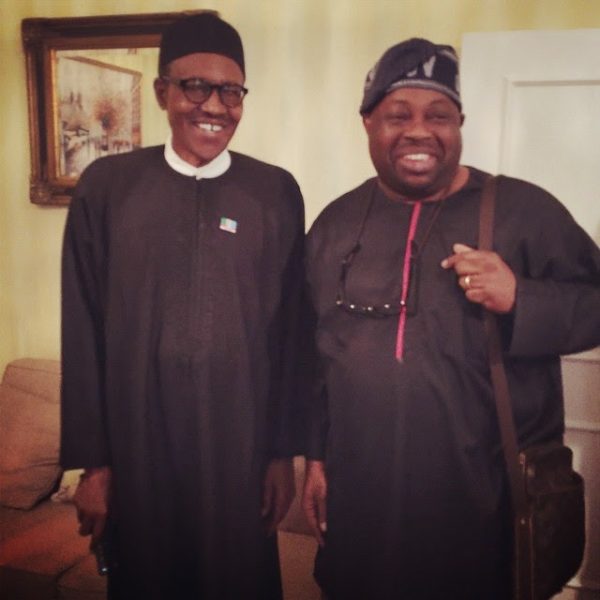 In a self-penned article titled, The Abuja Ministerial Blues, media mogul, Dele Momodu, is speaking out on rumours being circulated that he is on Buhari’s ministerial list.

He also discussed other hot topics including the lives lost during the Hajj stampede, Gamaliel Onosode‘s death and more.

The article was published on ThisDay. Here are excerpts:

Fellow Nigerians, the story you are about to read is the stuff of fiction. Or better put, it is like a play or movie. One title that readily comes to mind is that beautiful stage-play, ‘A Play of Giants’, by foremost playwright, Wole Soyinka. It is an incredible tale of power in Africa’s biggest nation, Nigeria.

Let me start it like this. I departed Ghana for Dubai the very day General Muhmmadu Buhari was declared winner of the last Presidential election in Nigeria. As soon as I landed in Dubai, I received countless messages of congratulations which must have been hanging whilst I was in the skies. Some of the senders asked if I was in Abuja in order to come celebrate with me. But I was far from Nigeria and told them so. For me the mission was already accomplished and it was time to take a bow. I was not a member of APC but merely a volunteer and sympathiser.

I couldn’t ever believe that my response did not go down well with some people. Unknown to me, they had banked on riding me as their donkey to the corridors of power in Abuja. They were so sure I could get whatever I wanted from the incoming government. All explanations to the contrary from me fell on deaf ears. They were convinced I was just being pretentious and didn’t want to be of help. The more charitable ones did not stress me much but pleaded with me to remember them in my forthcoming paradise. I shook my head in utter incredulity. Of course, I did not go near Abuja for about two months thereafter although I continued to be pestered from far and near by supposed well-wishers.

On my return to Nigeria from one of my trips a couple of months after the swearing in of President Buhari and the Vice President Professor Yemi Osinbajo SAN, I received a delegation of friends who I thought were just on a casual visit. After having a few drinks, one of them stood up to start a conversation: “Bob Dee, we have come to offer you some wise counsel. We want you to stop being foolish. You’ve paid your dues and deserve something tangible in this new government…”

If I thought he was just pulling my legs and being melodramatic, he soon overreached himself and did what I least expected! He suddenly went on his knees and started begging me like a penitent school kid: “Please, listen to us. Even if you are not interested, please do so for our sake. If we have you in government, it means we are there too. ..”

Then, he compounded the unexpected act, by diving flat on the floor in some grotesque form of prostration. I looked at the gentleman with great concern and anxiety as I wondered if he had suffered a bout of epilepsy. But he appeared normal and stable and revved into what seemed a monologue as I was too tongue-tied to respond: “See the way I’m lying flat, that is what I want you to do when you go to the Governor of your State, Adams Oshiomole. You will grab his leg and tell him you have come to solicit his help for a Ministerial appointment in Buhari’s cabinet. Please, don’t go empty handed o; not necessarily cash, just buy like a few cartons of champagnes. If his Madam is around, make sure you bend almost double when greeting her, lest you’re accused of arrogance!..”

I remained funereally silent. My friend was not done yet. He continued to soliloquise: “When you leave Oshiomhole, go quickly to see your man, Ogbeni Rauf Aregbesola in the State of Osun because you never know who God may use to make this dream a reality. Remember to repeat the same prostration when you get to Osogbo. Since Alhaji does not like alcohol, you may have to carry bundles of white fabric along. “ I could see that that the self-appointed consultant had it all worked out already and in effortless detail.

I was too stunned and speechless. He stood up without my prompting him. “Those two Governors are very important since your dad came from Edo and your mum from Osun. Now to cap it up, go and see Asiwaju Bola Tinubu. He is your man from way back in your exile days. Please, kneel down and again hold his legs and tell him he is the only one who can make this happen… If possible roll on the floor for maximum effect…” Wow”, I thought internally, “the extent to which one should go to bag a government appointment is amazingly extraordinary”!

I cleared my throat. He had spoken enough and given me ample time to fashion my response. I thanked him for caring so much. I assured him as much as I would want to serve my nation as a patriotic citizen, I know the process a bit. Beyond that, all the three influential people he wanted me to meet and cajole are not people who expect me to crawl to get anything from them. They know I have more self-respect than that and I would lower myself in their estimation if I behaved contrary to character and did a quarter of what he had suggested. I pointed out that “Governor Oshiomole is my big Brother who has shown me love over time. The last time we saw in Zambia, he said he would flog me literally if I don’t visit home soon. He even wants me to launch some of his pet projects across the State because he sees me as an Ambassador of Edo State”, I started my own sermon.

“The Constitution of Nigeria stipulates that The President must pick one Minister per State. Fairly, I expect the Governors, especially in APC States to have party members they want to put forward as Ministers. In fact, I don’t know how the President would honestly handle some States where there are too many heavyweights. A good example is Ekiti State where there is a long queue of accomplished citizens including three former Governors, Niyi Adebayo, Segun Oni and Kayode Fayemi plus Mr Dele Alake and Mr Femi Falana (SAN). There is also Lagos State, where the revered national leader, Chief Bola Ahmed Tinubu is expected to determine who gets what on account of his humongous contributions to APC. Lagos parades former Governor Babatunde Fashola, Rt. Hon. Adeyemi Ikuforiji, Senator Tokunbo Afikuyomi, Senator Olorunnimbe Mamora, Senator Ganiyu Solomon, Princess Adenrele Adeniran-Ogunsanya, Hon. (Mrs) Abike Dabiri-Erewa, Dr Muiz Banire (SAN), Hon. Jumoke Okoya-Thomas, Chief (Mrs) Kemi Nelson and others who worked assiduously for the monumental success of APC at both local and national levels.”

I continued by telling my audience that “virtually all the States have similar challenges. I won’t be surprised if this is the main reason it has not been easy to complete this selection even now. As much as the President would want to appear totally independent, it is pertinent that he does not act like he’s not grateful to some of his big supporters like some former Presidents, Vice Presidents, Lt. General T.Y Danjuma, Governors, former Governors and heavy funders of the campaign.“

Thank God, my friends listened with rapt attention. It is at times like this that I miss the wise and sagacious head of my friend, Prince Adedamola Aderemi at that meeting.  He would have politely stepped in and succinctly straightened everybody out. Fortunately, my friends seemed to realise I was making sense but they still didn’t see why I shouldn’t fight for it as others do, for whatever it is worth. I was not going to add to the existing headache, and tell them I would refrain from acting on their laid down strategy, so I said I was going to try. We departed on that note and I simply carried on with my usual routine.

I don’t know how my name crawled into one of the rumoured Ministerial lists but that was the beginning of proper wahala. My phones kept ringing off the hook from then. My wife was not spared. I received cvs in droves. Many appointed themselves as my Special Assistants or Personal Assistants. Many of them I didn’t know from anywhere. A few friends living abroad told me pointedly that they will return home pronto and work for me. Everywhere I turned I was being congratulated. No one listened to my denials. Even as I write this, my well-wishers have not given up. They told me they are praying and fasting. Someone called me yesterday and said he heard I was in Abuja for my screening. I responded that may be the screening is in London where I’m trying to convalesce at this moment.

In my entire life, I’ve never experienced this type of suffocating pressure. While I feel very flattered by all the sensation this has caused, I can confirm I now know why men of power can hardly perform unless they managed to dodge most of these strident calls and considered wicked. There is nothing I have said that makes any sense to the callers. I’ve been told to be positive and live by faith. Yes I’m a believer in God but I’m also a man who believes in Destiny. What is more, service to one’s fatherland should never be an act of desperation. In the fullness of time, you would be called upon if needed. And there is so much you can do for your country outside power.

I sincerely do not envy the President. If what I have gone through in my little corner is anything to go by, President Buhari definitely needs our prayers. I will encourage him to conclude picking his cabinet and move on. No matter what he does, it is impossible to please everyone. He is already doing fine and should tune up the tempo. May God guide and help him achieve his tall dreams for Nigeria.

Join the St-Rémy Photo Contest for a Chance to Win One Million Naira!