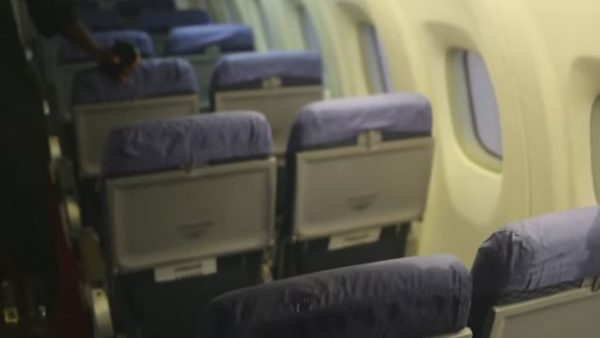 Wow! What would you do if you were on a plane and then water starts leaking from the roof when it’s raining?

A passenger on the plane of a Nigerian aircraft was left bewildered when this happened.

The individual sent the video to Sahara Reporters, and the post was published on YouTube with the following caption:

This was sent to me by a passenger who flew Overland Airways from Abuja to Ilorin.
He shared his experience below:
“I presume it started raining shortly before our landing as we waited in the plane for the Airline staff to get us umbrellas to shelter. All of that sounds good, right? Until we discovered the plane was leaking. Please see attached photos and video.

Although it wasn’t immediately clear if the leak was from the rain or the plane’s cooling system, one thing was evident: the rate of leakage was proportional to the fluctuating intensity of the rain. At heavy intensity, the leak was pouring. When the rain subsided, it became more of a drip. In any case, the structural integrity of the aircraft is brought to question.”