BN Style presents Prince as a Fashion Icon: Highlights of the Legend's Style and Love for Purple

Prince, a legendary creative who passed away on Thursday, will be remembered just as much for his style and fashion choices as well  as his imense contribution to music.

Much like David Bowie, Prince was never afraid to be a man and embrace his ‘feminine side’ with his androgynous looks that continue to inspire so many pop stars we’ve seen today like Lady Gaga and Miguel.

With 3-4 inch heels and ruffle peasant blouses, he challenged and stretched the boundaries of gender and masculinity with his red carpet looks and on stage costumes.

The fashion industry also mourns his death most especially one of his close friends Donatella Versace.

Nobody has married music and fashion as #Prince did with Versace. Prince was a genius, most of all my friend. Love you, miss you – @donatella_versace

In this post today we’ll be showing you a few highlights from the music icon’s fashionable life. From his hair to makeup, clothes and accessories, here are a few memorable stylish moments from the iconic  reign of the Purple Prince.

Hair & Makeup
He was popular for his curly afros in the 80’s and later his pixie cuts.

LOS ANGELES, CA – FEBRUARY 08: Musician Prince speaks onstage during The 57th Annual GRAMMY Awards at the at the STAPLES Center on February 8, 2015 in Los Angeles, California.

A Burst of Colours

arrives at the 2007 Vanity Fair Oscar Party at Mortons on February 25, 2007 in West Hollywood, California.

during the Super Bowl XLI Half-Time Press Conference at the Miami Convention Center on February 1, 2007 in Miami, Florida.

Monochrome, polka dots and text covered sleeves. Notice Minneapolis on his sleeves, that’s where he was from.

Accessories
His hades, hats, shoes, jewellery and even his guitar made a statement, especially his famous purple guitar in the shape of a sign he once called himself.

MIAMI GARDENS, FL – FEBRUARY 04: Prince performs during the ‘Pepsi Halftime Show’ at Super Bowl XLI between the Indianapolis Colts and the Chicago Bears on February 4, 2007 at Dolphin Stadium in Miami Gardens, Florida. 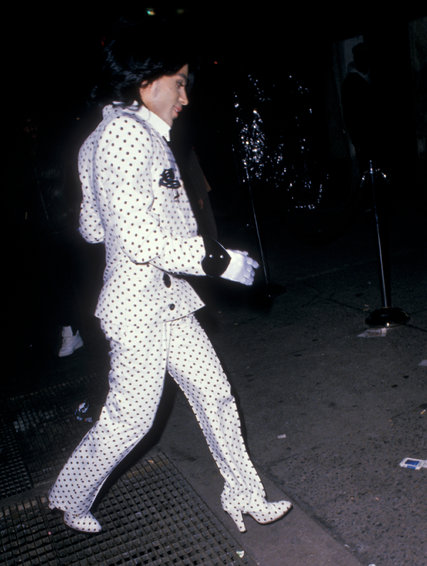 NEW ORLEANS – JULY 2: American musician Prince wears a wig, sunglasses, and a false goatee as a disguise with the opening act of The 10th Anniversary Essence Music Festival on July 2, 2004 in New Orleans, Louisiana.

performs onstage during the 2012 iHeartRadio Music Festival at the MGM Grand Garden Arena on September 22, 2012 in Las Vegas, Nevada.