The days when pregnant women wear loose clothes to hide their baby bumps are long gone, these days the bump is an accessory and today’s woman isn’t afraid to bare her bump! From pregnancy photoshoots to red carpet looks and street style, BN Style is looking into maternity style from different women to help inspire you!

Today, we’re featuring US model and wife to John Legend, Chrissy Teigen. What we’ve noticed is an effective formula of bare legs with a mix of empire/high waist cuts and longline jackets and we have the photos to prove it!

The first time we heard their pregnancy news was in October of 2015 with this really cute photo of the couple and ever since then, Chrissy’s pregnancy style has evolved with her bump but it still remains modish. 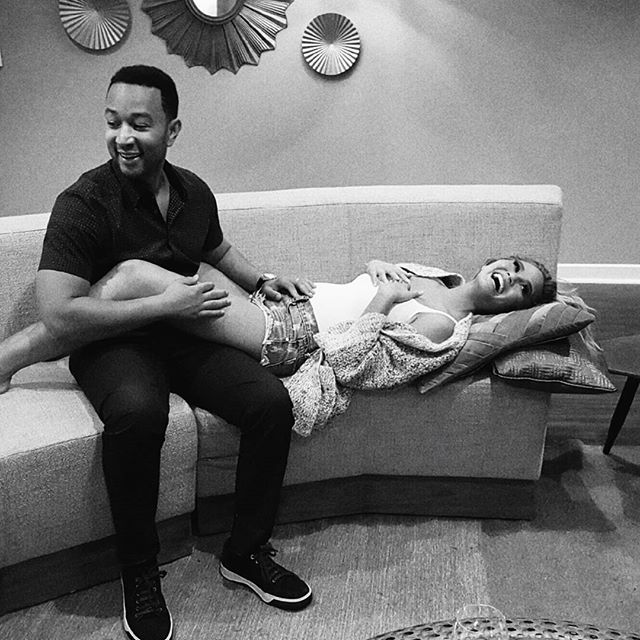 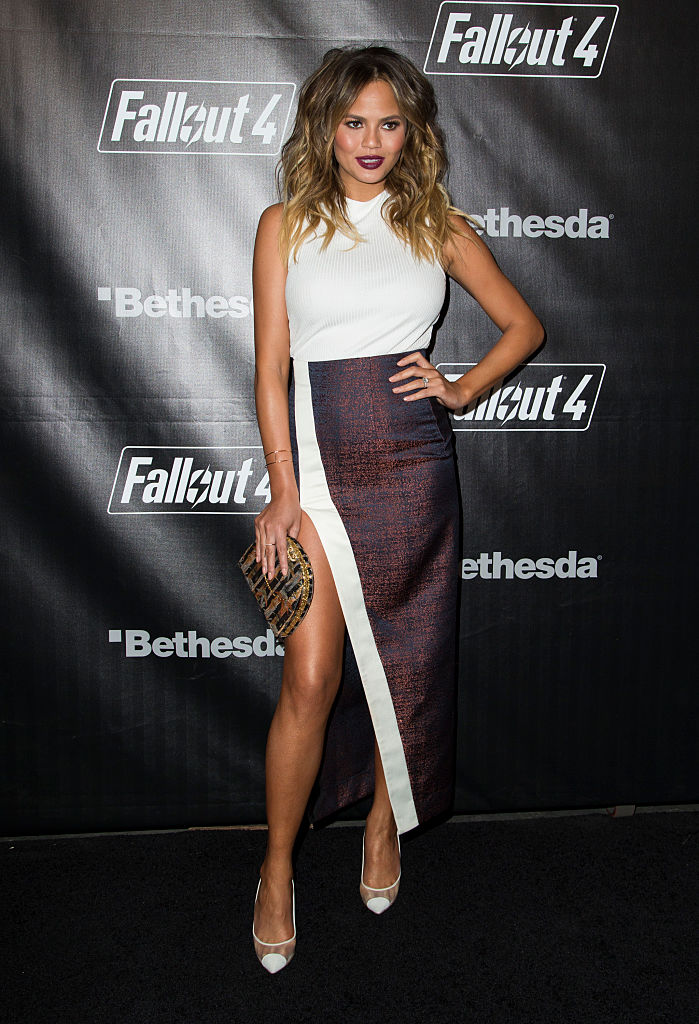 Here she is a month after the announcement at an event with a thigh high slit on a high waisted skirt. 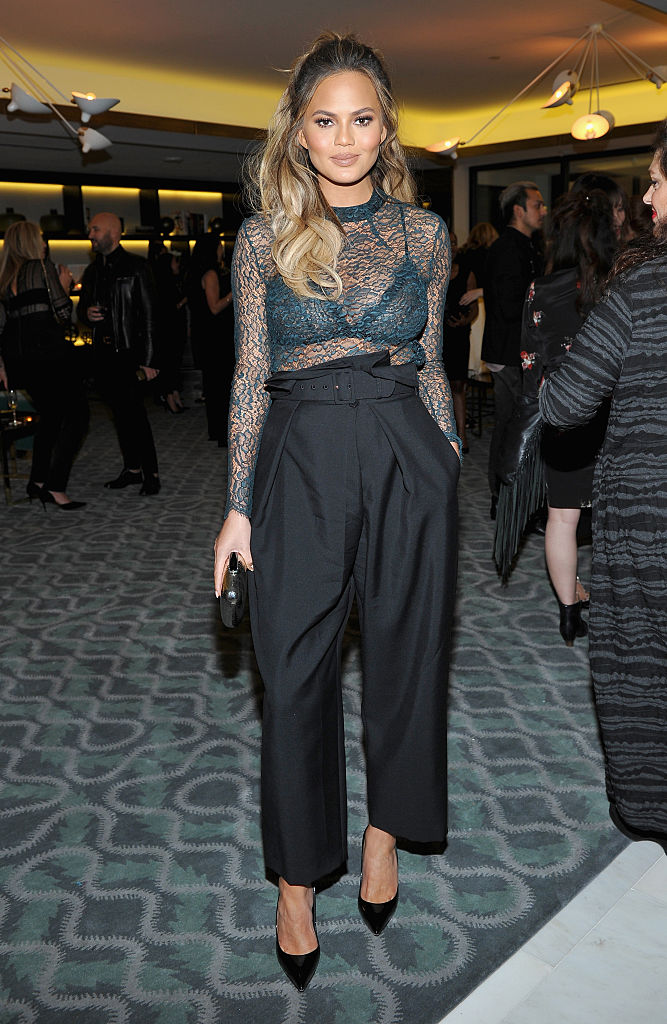 She’s wearing Stella McCartney high-waisted trousers and a see-through lace Femme d’Armes top. The bump is in its early stages and this outfit does a good job a hiding the bump. She doesn’t even look pregnant here! 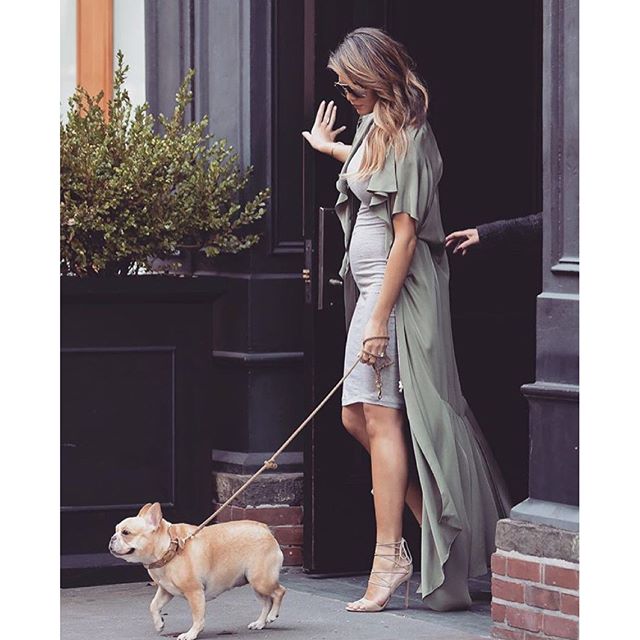 While casually walking her dog, Chrissy is spotted here wearing a form-fitting gray knit dress layered underneath a floor-length olive jacket. This look is quite similar to Kim Kardashian‘s pregnancy style with form fitting clothes. 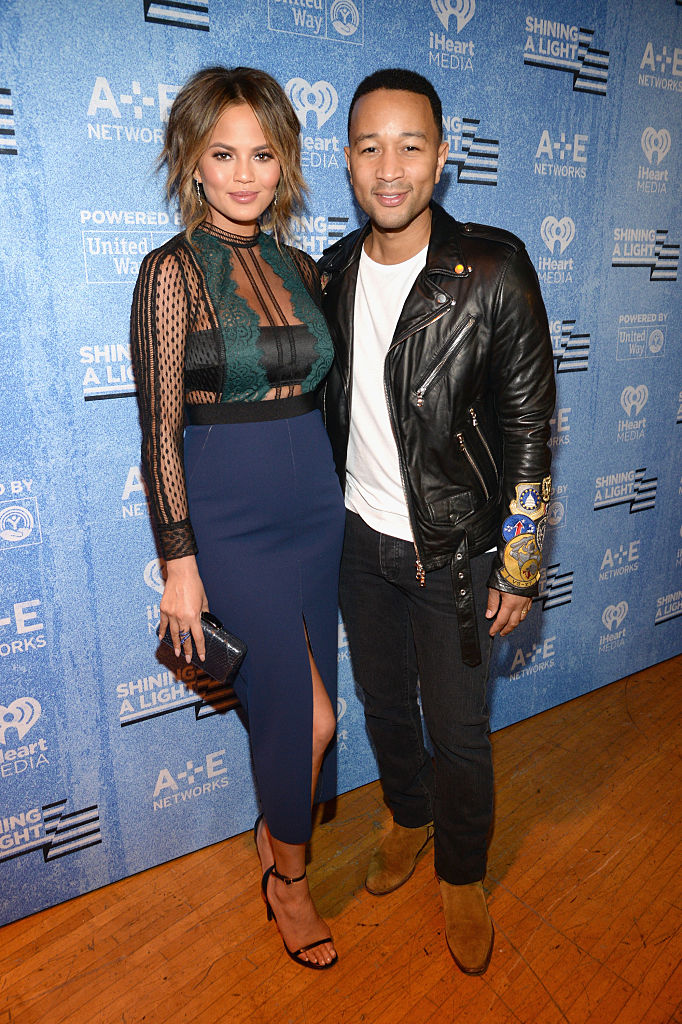 At an event with hubby John Legend, she’s wearing a sheer Self Portrait dress with an empire waist feature. 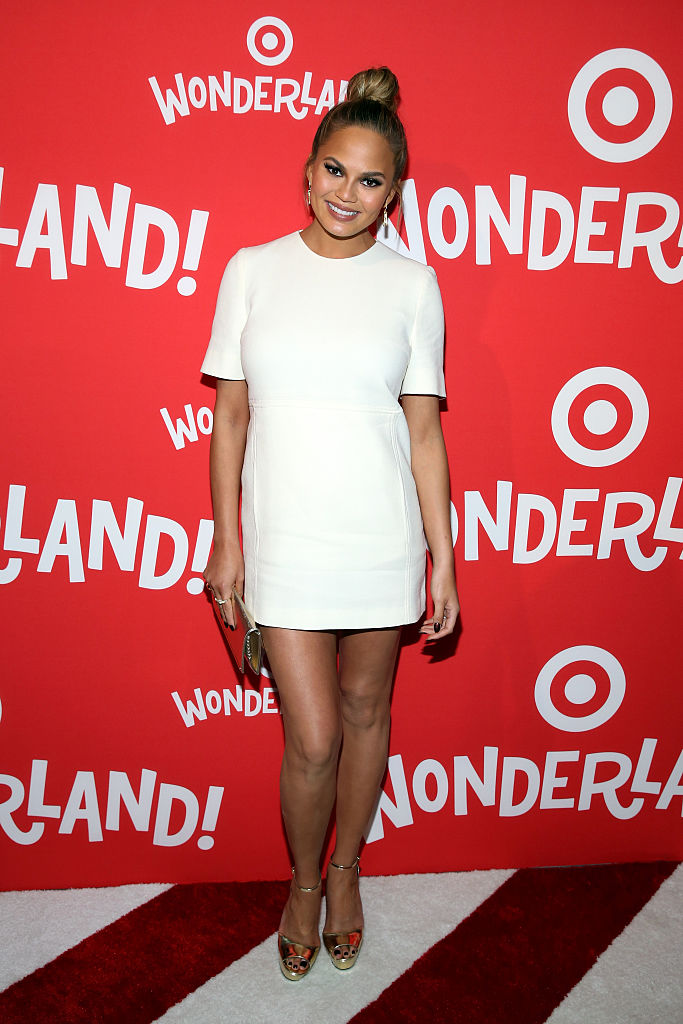 Looking cute in this white outfit, the model channels the ’60s in a Victoria Beckham minidress and gold KG Kurt Geiger platform sandals. 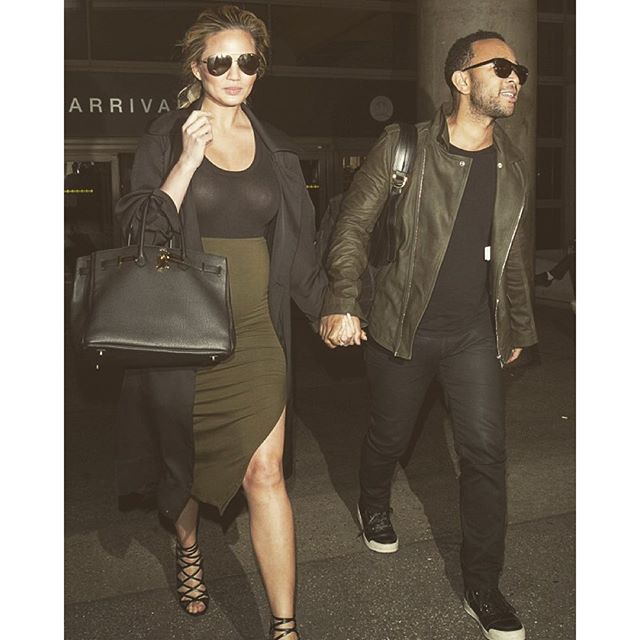 Leaving the airport, Chrissy and her husband wear matching black and army green ensembles with her long black jacket and army green high waist skirt which also features a side slit. 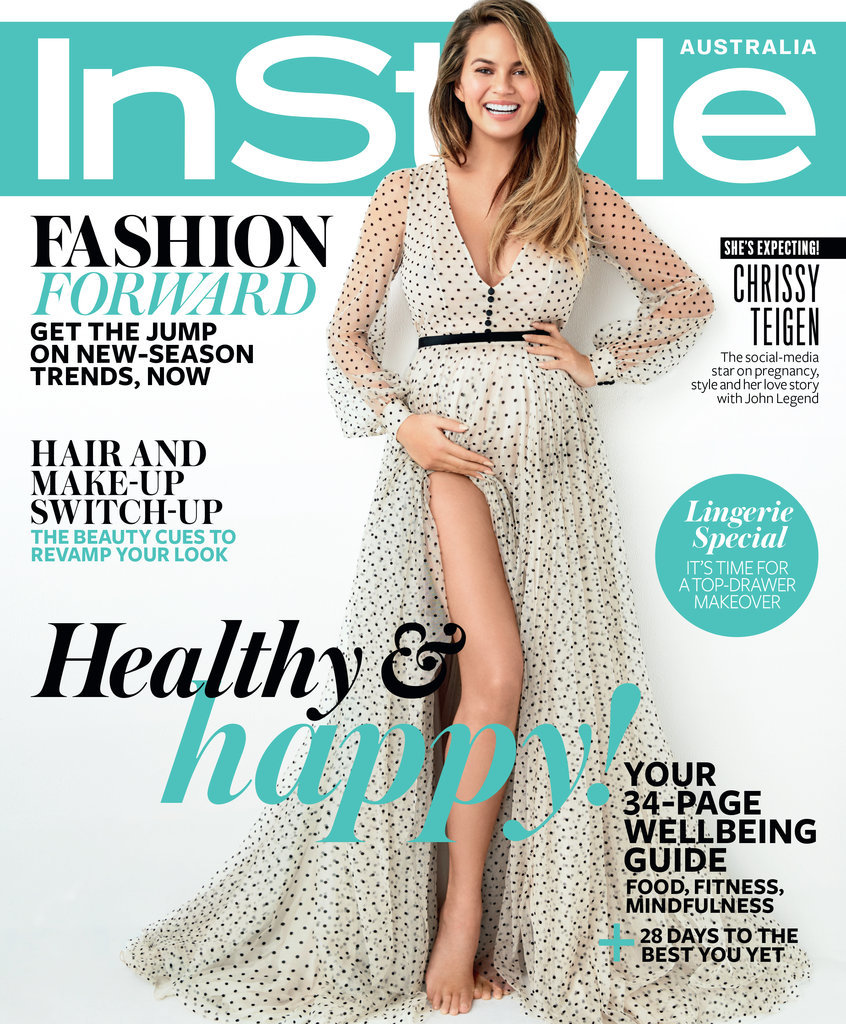 Chrissy is glowing on the February 2016 cover of InStyle Australia wearing a polka dot maxi dress featuring a thigh high slit and a defined high waist with a black band. 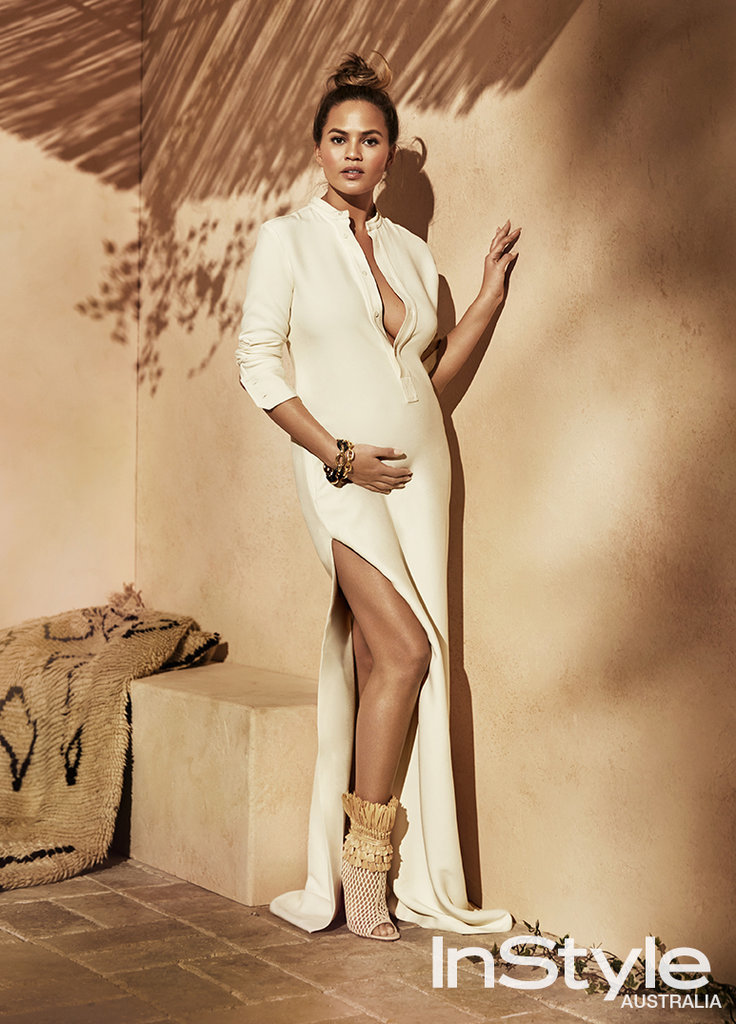 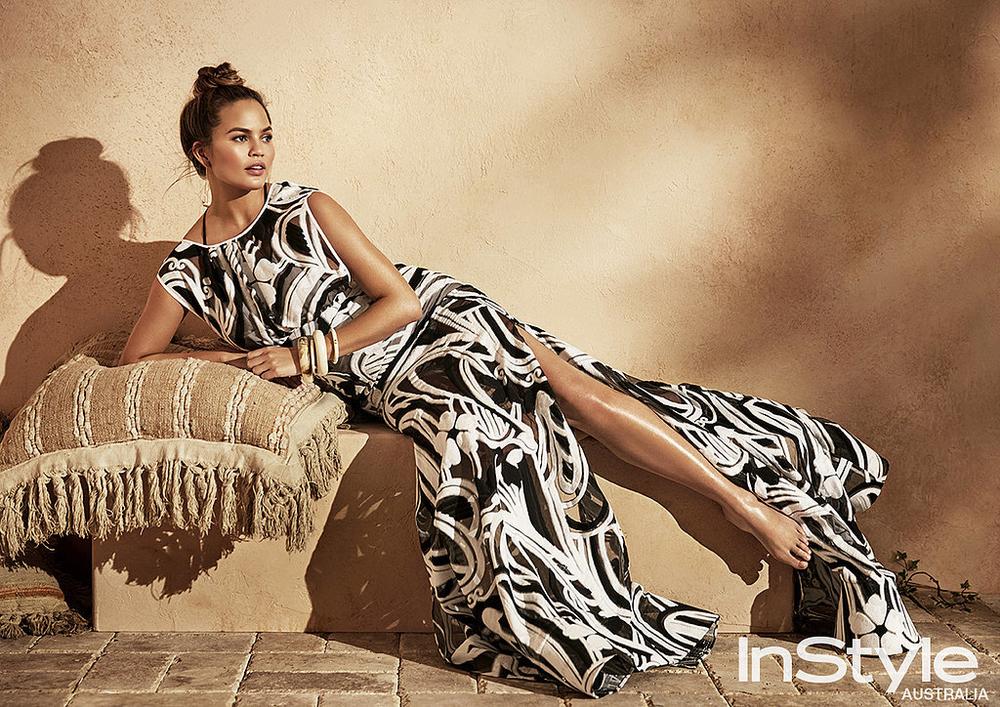 In these two photos from the InStyle Australia magazine spread she also sports dresses with thigh high slits. 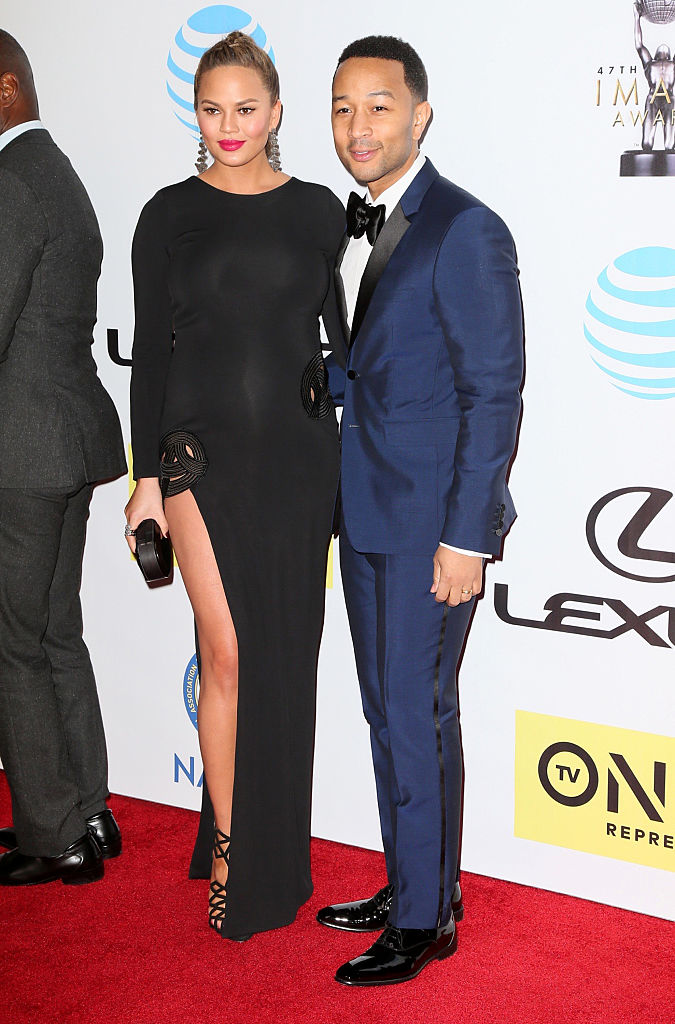 Not tired of baring her legs, here she is in another red carpet dress by Haney with a thigh high slit and Giuseppe Zanotti cage heels. 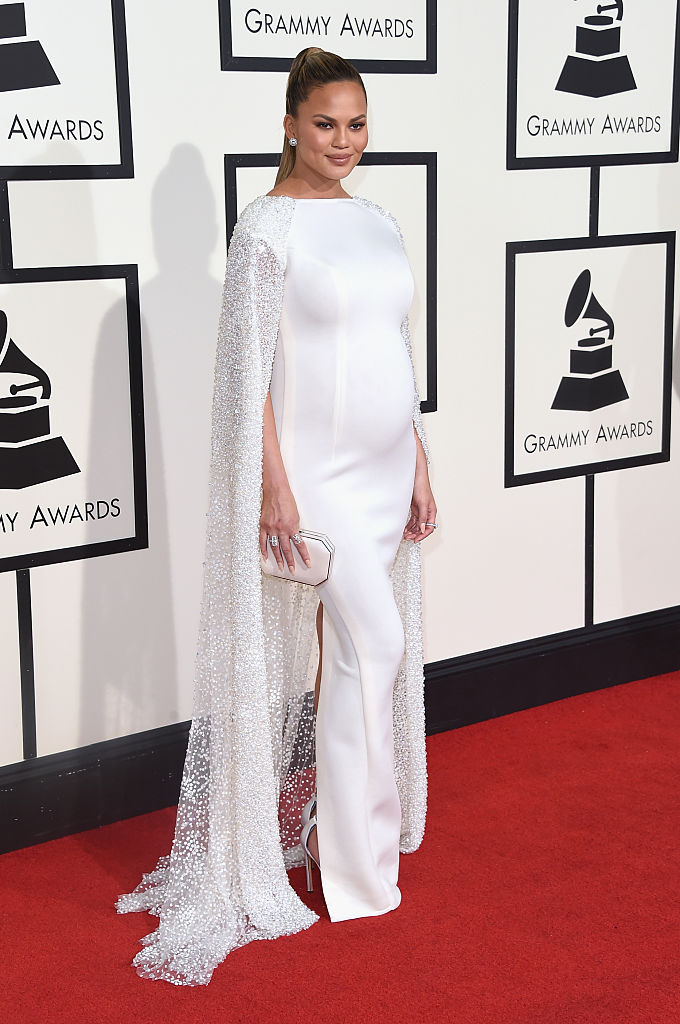 Similar to the effect of a long jacket, this white dress has an extended cape sleeve. 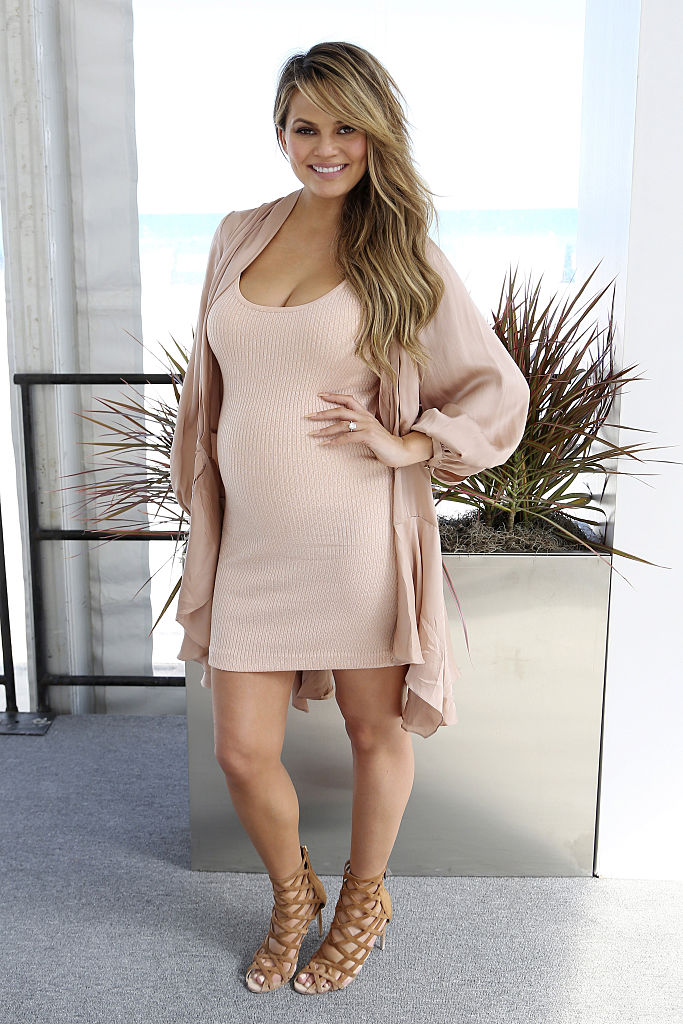 The model with her perfectly toned legs pairs this form fitting dress with a bishop sleeved jacket. 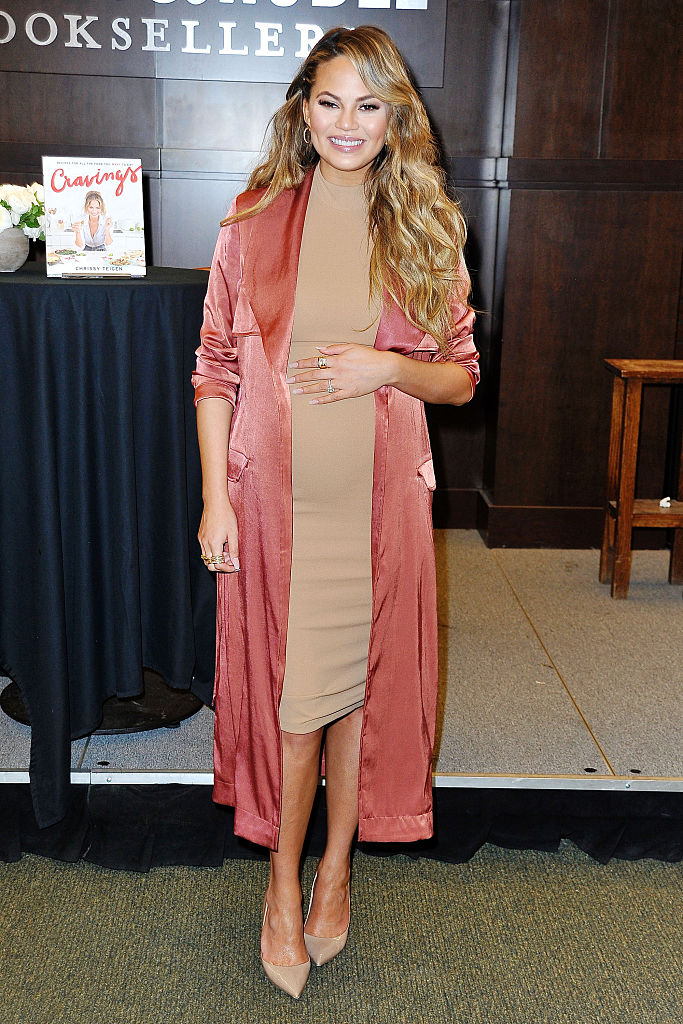 LOS ANGELES, CA – FEBRUARY 23: Chrissy Teigen signs copies of her new book ‘Cravings: Recipes For All The Food You Want To Eat’ at Barnes & Noble at The Grove on February 23, 2016 in Los Angeles, California. 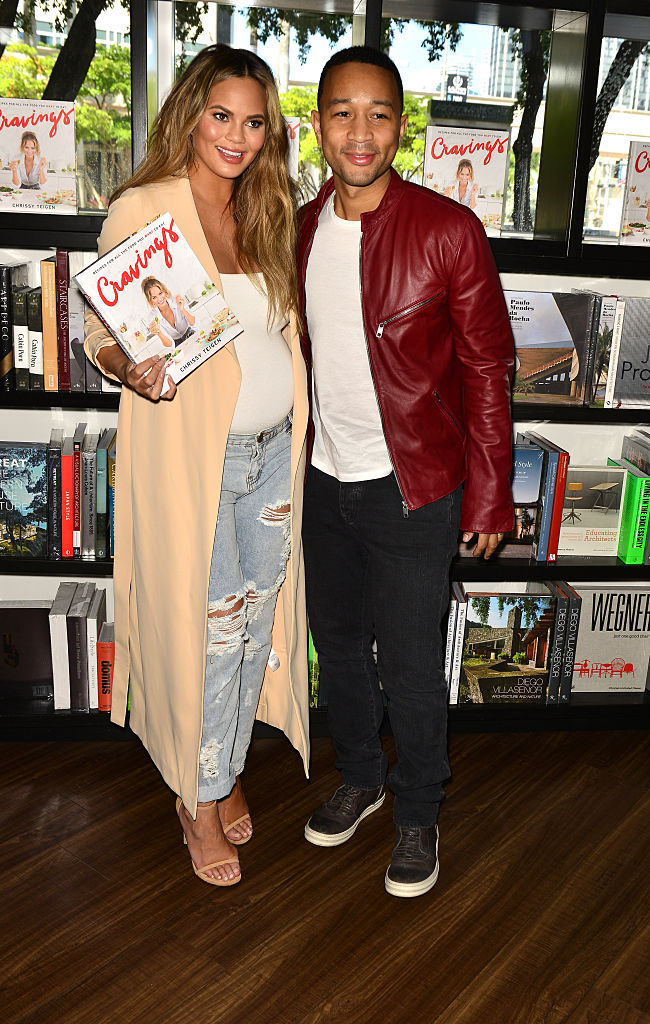 At another one of her book signings with her husband, she wears ripped jeans and another long duster jacket. 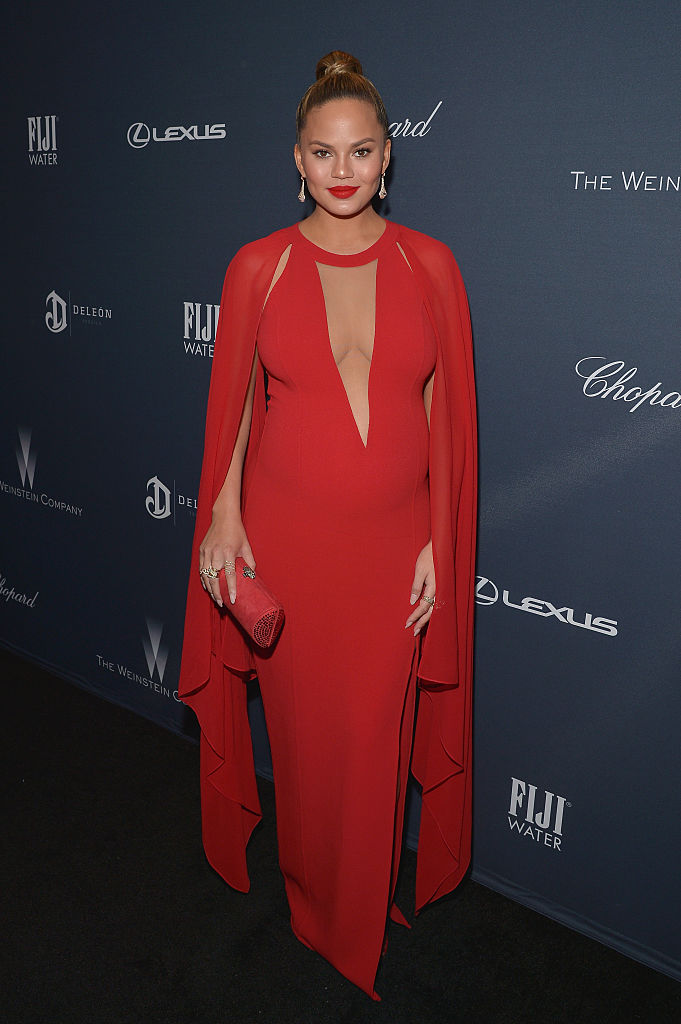 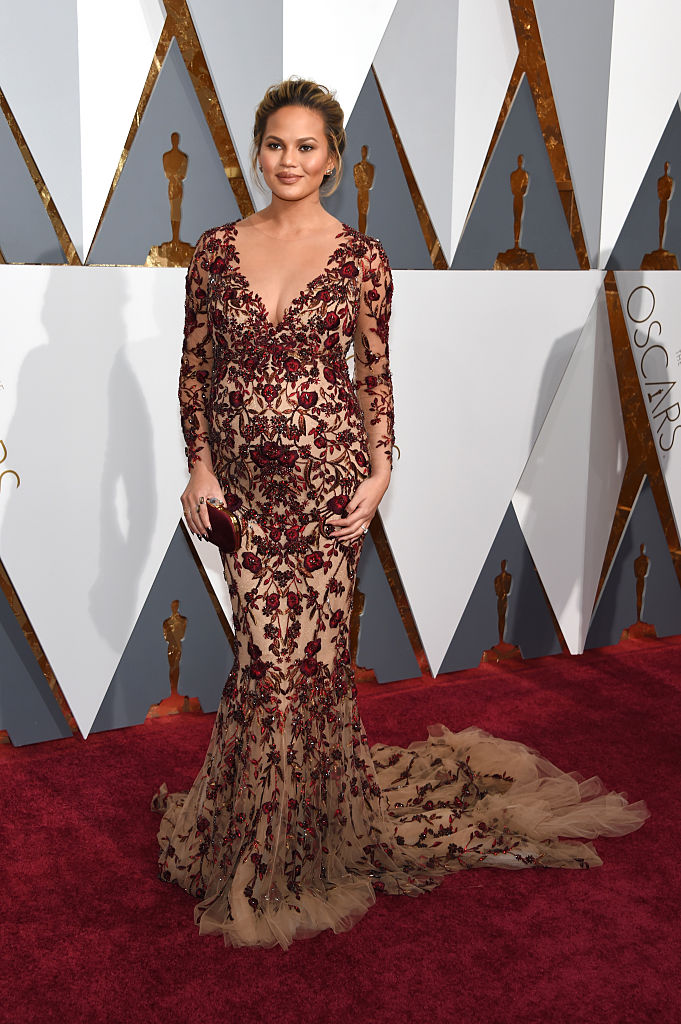 In another Marchesa dress for the Oscars, Chrissy looks stunning! 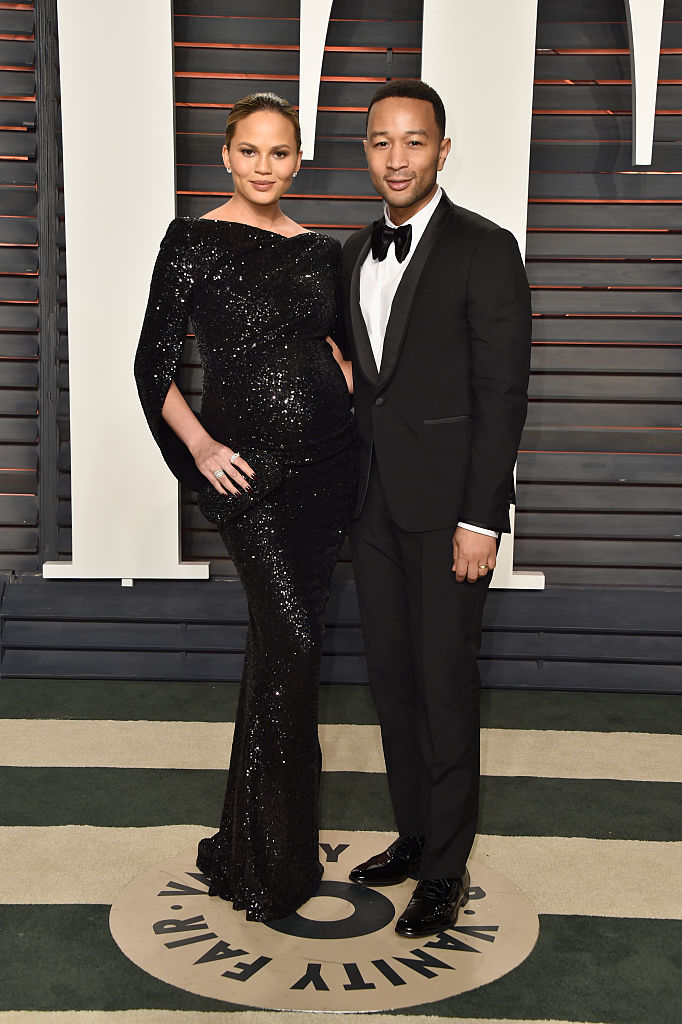 attends the 2016 Vanity Fair Oscar Party Hosted By Graydon Carter at the Wallis Annenberg Center for the Performing Arts on February 28, 2016 in Beverly Hills, California.

This outfit might just be my favourite. Chrissy is wearing a sequined black dress by Talbot Runhof with bell sleeves and a low back. 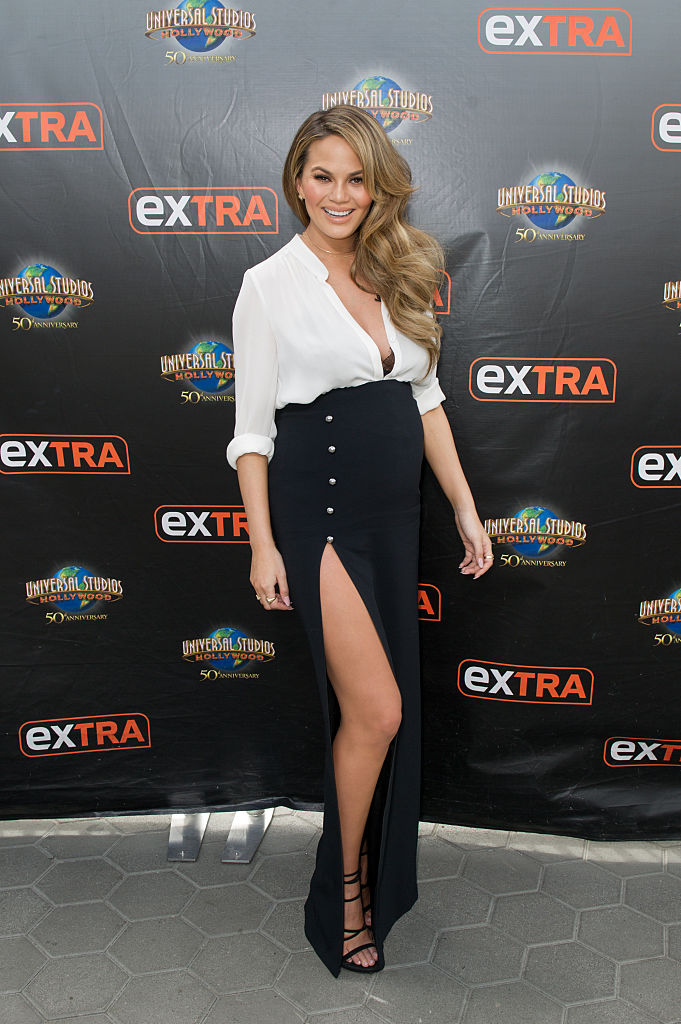 With another high waist skirt featuring a thigh high slit, Chrissy wears a black and white outfit and looks uber stylish with her scrappy heels.

In conclusion one thing is certain, the model/mom to be lets her legs do all the talking just so we don’t forget she’s a swimsuit model. Again her choice of styling reiterates the points I gave in the BN Body Series, expose your slimmest parts and enhance your best features and you’re fine! The point between her bust and belly is currently the slim part of her torso, the high waist styles define that. Her legs are slender and toned, the thigh high slits help flaunt that.

Hope you enjoy this maiden edition, there’ll be more on the way. If you have any suggestions on who we should cover next, please feel free to let us know.

Kylie Jenner talks Suffering from Anxiety, Dealing with Bullies & Rising above her Insecurities in Paper Magazine