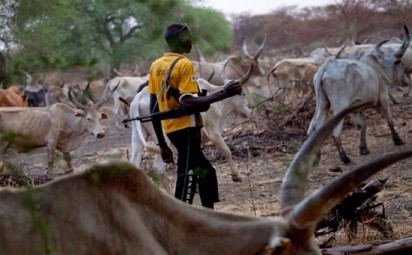 Soldiers of the Guards Brigade of the Nigerian Army have on Monday, arrested 92 armed Fulani Herdsmen in Abuja.

Confirming the report, the Assistant Director, Army Public Relations of the Guards Brigade, Captain Bashir Jajira said that 36 of the herdsmen were arrested at a checkpoint between the Federal Capital territory and Nasarawa state. He also said that the other 56 were arrested at a military checkpoint in Dantata, along Abuja Airport road.

“A group of 36 herdsmen in Diana Truck and Toyota Camry car with registration number Abu Kuje 994 FX and Niger SUL 541 XA were intercepted and arrested at 177 Guards Battalion location by Keffi checkpoint. During the interrogation by troops at the checkpoint, they claimed to be going to Nasarawa Local Government in Nasarawa State,” he said

He also said that the herdsmen will be handed over to the police for prosecution.

This is coming after President Buhari ordered the deployment of troops to all parts of the country currently witnessing bloody clashes between herdsmen and farmers.