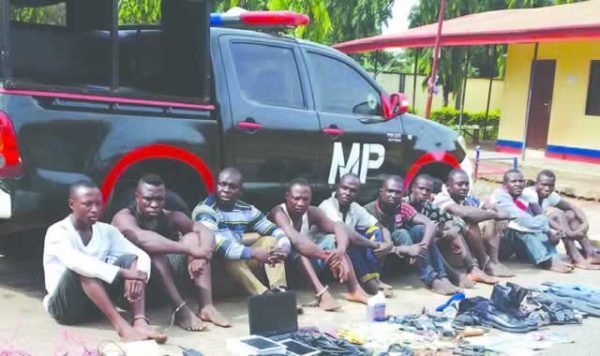 The Nigerian Army has arrested 10 suspected members of the militant group, Niger Delta Avengers. It said that the suspects were arrested at about 1:40 AM on Saturday in Oporaza community, Warri South-West Local Government Area of Delta State.

The Commander of the 4 Brigade, Brigadier-General Farouk Yahaya paraded the suspects on Sunday in Benin, the Edo State capital.

Others were seven wraps of substances suspected to be Indian hemp, five speedboat throttle cables, six pairs of hand gloves, the sum of N23,000 cash and a cheque book.

According to Yahaya, “Within the period under review, you can see that the Niger Delta Avengers have claimed virtually all acts of criminal activities against oil and gas and they continue threatening a shutdown of the whole sector. So, most likely, they (suspects) will be the people, who else would they be?”

On the speculation that the militants might have adopted the use of charms to evade arrest, Yahaya said:

Whatever a person wants to use, he can use it. But I know that God is always on the side of the truth.

We are not worried by voodoo. It did not stop the suspects from being arrested and others that have been arrested before now.

Operations that led to these arrests and recoveries were conducted professionally, guided by our mandate, operation orders, code of conduct and rules of engagement. Our operations are strictly targeted against perpetrators of all criminal acts in our area of responsibility and not innocent citizens.

Yahaya also called on the public to provide the Army with relevant information on militant groups to assist it to combat criminal elements in the interest of the country, noting that the suspects would be handed over to prosecuting security agencies at the end of preliminary investigation