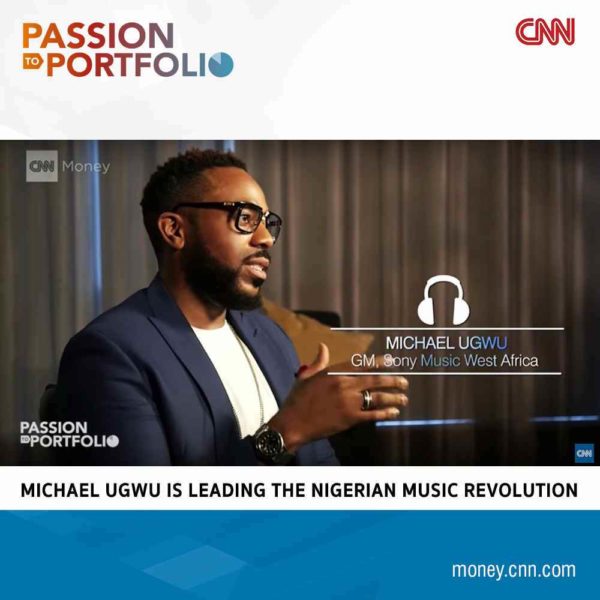 In a recent episode of CNN‘s Passion to Portfolio themed  “A Passion for Music, a Pioneer in Business“, the business TV show features Music business entrepreneur and Sony Music West Africa‘s pioneer General Manager, Michael Ugwu. In their own words, with the evolution the music industry is undergoing, Michael Ugwu is in high demand which is why he was on a panel of experts discussing the Nigerian Music Industry at the just concluded SXSW Music conference and the reason Sony Music Entertainment brought him on board when it was time for them to get into the West African Market.

On what inspired him to get into the music business, he had this to say:

“I was in finance in the UK, I’ve been in the fashion space because I love fashion, I got into farming for a little bit and after that I went into politics.  I don’t feel like I actually work, I feel like I wake up everyday to do something that I love.

He believes there are things a corporation like Sony Music can do to help up the stakes locally such as more exposure for artistes internationally coupled with a better presence of International acts locally. He also believes that an ever-growing audience able to legally stream content will make the music industry boom in Africa.

Everybody loves music, but coming from a traditional family you can’t say “I want to go into music” because people would think one was crazy”

#BNFroFriday: An Easy Hairstyle for the Weekend! Learn how to get this Afro Puff with Lizlizlive