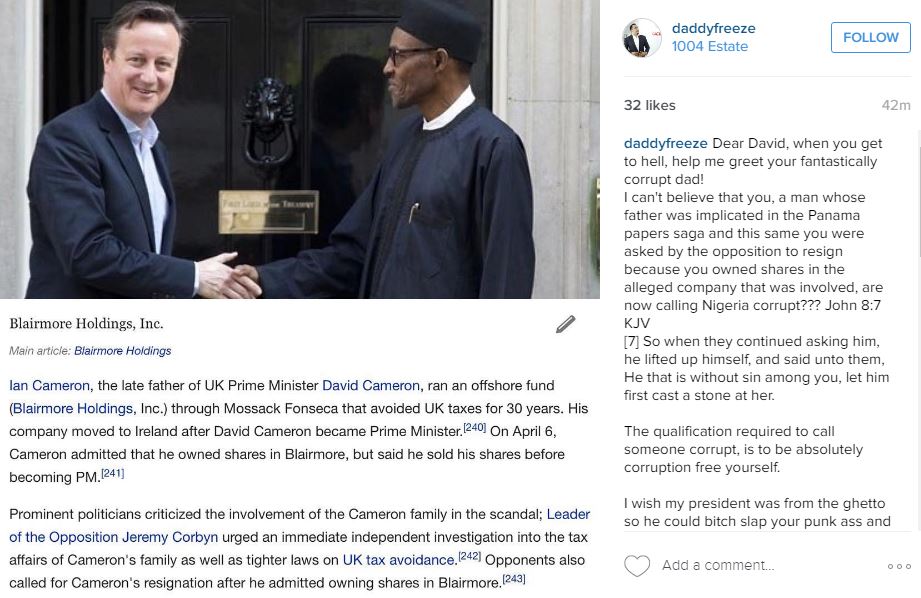 While debriefing the Queen yesterday, UK Prime Minister David Cameron, made a statement about Nigeria and Afghanistan being “Fantastically corrupt” and since then a lot of responses have come in. Click here to read some of them.

On-Air Personality and Event Host, Freeze, has joined in the conversation. He put up a photo on Instagram with the caption:

Dear David, when you get to hell, help me greet your fantastically corrupt dad! I can’t believe that you, a man whose father was implicated in the Panama papers saga and this same you were asked by the opposition to resign because you owned shares in the alleged company that was involved, are now calling Nigeria corrupt??? John 8:7 KJV So when they continued asking him, he lifted up himself, and said unto them, He that is without sin among you, let him first cast a stone at her.

The qualification required to call someone corrupt, is to be absolutely corruption free yourself.

I wish my president was from the ghetto so he could b**** slap your punk a** and turn you bright pink.

But then again….. He wouldn’t want to stain his palms.~FRZ

Related Topics:David CameronFreeze
Up Next

It’s About to Go Down! Watch the New Trailer for “Orange is The New Black” Season 4