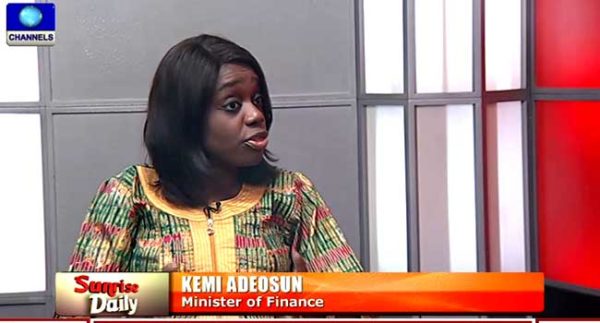 Nigeria’s Minister of Finance, Kemi Adeosun was on Channels TV’s Sunrise this morning and she was able to clarify how this Government is making cuts to save the economy and budgetary allocations.

In her interview, she reaffirmed a statement earlier made by President Muhammadu Buhari that the government inherited an empty treasury, in addition to a high debt profile and these have made things difficult. Adeosun also said that the previous administrations in Nigeria failed to build savings while the country enjoyed massive revenue from high price of oil globally and this put the country in a tight condition when the oil price fell.

She noted that Nigeria’s sole dependence on oil made the impact much tougher on the economy and the citizens.

“If you look at oil, its only 13% of our GDP but it represent 70% of government’s revenue which means if anything happens to oil, it affects everybody.

“The question we are trying to now resolve is; the remaining 87% of GDP, why is it contributing so little to government’s revenue? If we are able to have those other revenues which are much more stable, predictable and less volatile, then if the oil price goes down, we’ll be able to maintain some level of stability.”