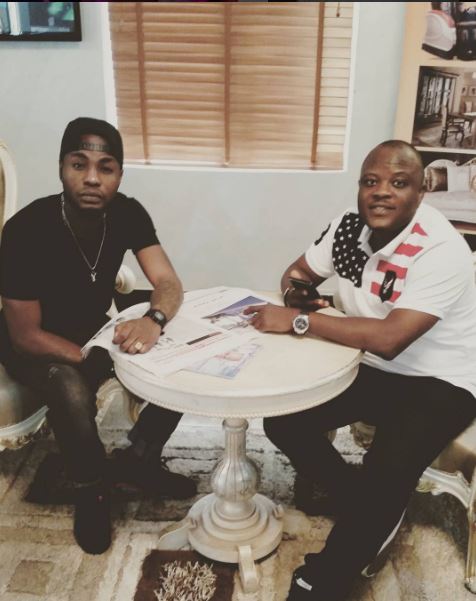 Rayce and his manager Danku

Earlier this week, reports came in about alleged fraudulence and extortion by Rayce and his manager Danku.

It was alleged by the owner of Barcode lounge that the duo connived to swindle him of some money after agreeing to perform for free at his club in Kaduna.

Here’s Barcode Lounge CEO’s side of the story:

Barcode lounge end of season 1 party was on the June 4th 2016 and Rayce got through to the management of Barcode through Dj Nani that he would like to come and perform at the party for free.

The management of Barcode lounge had no intention of inviting any artist to the party but due to the relationship between Dj Nani and Barcode CEO they accepted.

After booking Rayce’s and his Manager Danku flight tickets. On the day of the event the manager called the CEO of Barcode that they had missed their flight and they will appreciate it if he could help them with N50,000 out of the money he was planning to give Rayce out of his free will for coming to Kaduna and this was to enable them pay for Rayce’s hotel accommodation and take the next available flight to Kaduna which the CEO of Barcode lounge sent to them immediately.

Danku now called again that they are on their way to the airport and they will also need some money to enable them change their ticket at the airport , which he also sent them another N20,000. After another 2hrs Danku called again that they are at the airport but there is no flight again to Kaduna or Abuja and the only flight left his to Kano which is a different airline from the one booked for them and they will need N60,000 to get a fresh ticket to enable them board as the flight was boarding, the CEO of Barcode lounge sent them the N60,000 again to buy the ticket, after another 20mins the manger called again that they are on board but the airline has refused to carry them unless they upgrade to a business class,that was when Barcode CEO became suspicious of foul play and started questioning Danku that it is not possible for a passenger to have paid for an airline ticket and they will refuse to carry the passenger unless he or she upgrades to business class, during this phone conversation the manager ended the call immediately . On calling Rayce’s manager back he said they did not make the flight again.

The Barcode CEO took it in good faith and told Danku to return his money, Danku immediately said that it is not a problem but he had the cash on him but been it Saturday  the banks are closed. The CEO of Barcode immediately told him not to worry that a staff of his was at the airport and he should give him the cash, that he will forward his staff’s number to Danku, which he did. He also called his staff by the name Olumide and gave him the instructions to collect the sum of N130,000 from Danku.

Olumide called Danku on several occasions which he refused to pick, after he picked up Olumide asked for his location that he has been instructed to collect the sum of N130,000 from him he refused to disclose his location that he is on the phone with Barcode management working on a new date to come to Kaduna and the money with him was N60,000. All these were blatant lies because at that point he was not picking the CEO’s call again until he called DJ Nani and lamented on Rayce and his manager’s actions and threatened to take their action up legally. That was when Danku decided to pick Olumide’s call telling him that he was at pen cinema. Immediately Barcode CEO reported this action to the company’s legal adviser who in turn called DJ Nani to express his disappointment and Dj Nani also passed the message to Danku and Rayce.

Tooxclusive got in touch with Rayce’s manager, Danku, for their side of the story. He expressed how disappointed he was upon being told about the news and acknowledged receiving N50,000 sent to the artiste saying that the money was eventually paid to his costume manager for the things he got for the show.

Here’s Danku’s side of the story:

The management got to know about the show late and the artist explained his relationship with them to him which I thought was cool. I was made too understand they booked an early ticket for us which we missed because we were not informed early and we had things to do, but I still spoke with their management and I went to the airport with the artist. Unfortunately there was no flight to Kaduna and the only flight left was for Kano which I told him and he sent 60,000 Naira to book the ticket and I told my agent to do so,he booked a standby ticket and we boarded but we discovered the plane was occupied unless we upgrade our tickets to business class.

I called him and I told him the situation on ground and the fact that we can’t make it, that was when he spoke about the money he has spent for tickets both the early one he booked and this particular one and I told him that if the ticket money is going to be an issue I’m going to credit his account once I refund the money from my agent and he said OK.

Now come to think of it, how much was paid to the management for the appearance and subsequent performance? Nothing. How much are they talking about?

I was so surprised to see the news and I felt bad about it, it’s more like trying to rubbish my name or maybe they were looking for cheap publicity which I hope they have gotten.

I even read that my artist got to the club through DJ Nani, am I that jobless to leave all the paid shows I have and beg for a club performance in Kaduna. I hope they had a great thought before taking this action because there is always an implication to every foul play and as a matter of fact I have spoken to my lawyer and legal actions are being taken at the moment. I am not going to refund them from the managements purse as I intended since they can take to the news, so they’ll wait till I get a refund of the tickets.