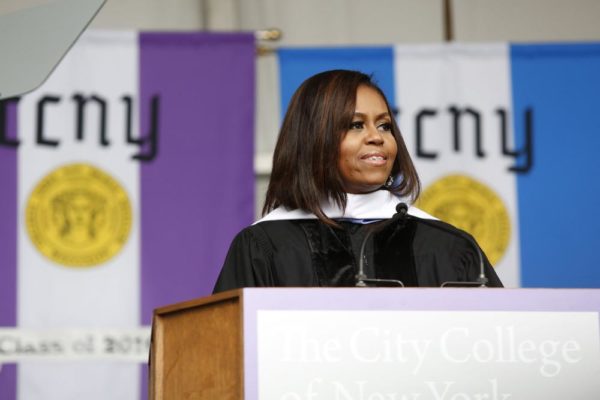 First Lady Michelle Obama was awarded a honorary Doctorate Degree in Humane Letters and she also delivered her last commencement speech as First Lady of the United States at City College of New York on Friday, June 3rd 2016.

In her speech, she gave a barely veiled critique of Republican Presidential Candidate Donald Trump, warning the new graduates that while their diverse backgrounds are to be celebrated, they should beware of those who “build up walls to keep people out”.

She said,”They seem to view our diversity as a threat to be contained rather than as a resource to be tapped, They tell us to be afraid of those who are different, to be suspicious of those with whom we disagree. They act as if name-calling is an acceptable substitute for thoughtful debate. As if anger and intolerance should be our default state rather than optimism and openness that have always been the engine of our progress”.

Invoking her travels as first lady, Obama remarked that she has visited dozens of countries over the last seven years.

I have seen what happens when ideas like these take hold. I have seen how leaders rule by intimidation, leaders who demonize and dehumanize entire groups of people often do so because they have nothing else to offer. And I have seen how places that stifle the voices and dismiss the potential of their citizens are diminished, how they are less vital, less hopeful, less free. Graduates, that is not who we are. That is not what this country stands for. Obama continued, before alluding to Trump’s Make America Great Again slogan. “No, no, here in America, we don’t let our differences tear us apart. Not here. Because we know that our greatness comes from when we appreciate each other’s strengths, when we learn from each other, when we lean on each other, because in this country, it’s never been each person for themselves, no we’re all in this together. We always have been”.

The greatness of the United States has never come from folks who climbed the ladder of success or who happened to be born near the top and then pulled the ladder up after themselves.

Here in America, we don’t give in to our fears, we don’t build up walls to keep people out, because we know that our greatness has always depending on contributions from people who were born elsewhere but sought out this country and made it their home.”

Here’s an abridged version of her address: