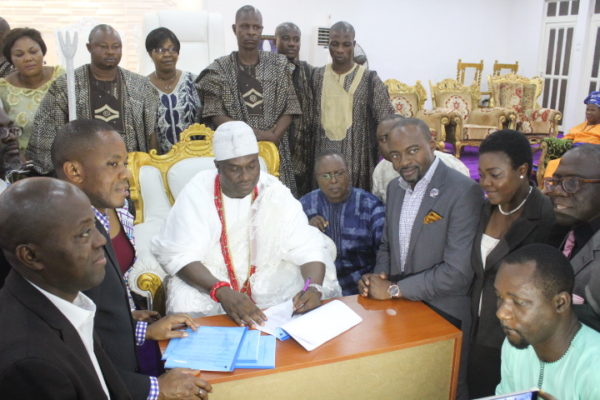 The Ooni of Ife, His Imperial Majesty Ooni Adeyeye Enitan Ogunwusi‎ (Ojaja II) on Tuesday July 12 at his Ile Oodua Palace, Ile-Ife signed a Memorandum of Understanding (MoU) with a U.S. based company SpringPort Technological Group to build a Technology, Media City and Agriculture Incubation Hub in the town.

The huge investment came barely two weeks to the return of the Ooni from the USA where he had earlier visited to seek involvement of Africans in Diaspora in his peace and unity agenda and  solicit their support for the continent on developmental projects in agriculture, tourism, infrastructure and youth development.‎

With the MoU, the technological hub worth $1.4bn in its first phase, is expected to facilitate massive employment of youths in Ile-Ife. After the MoU was signed, the start-up phase for master plan was to begin with investors in London and Asia.

Subsequently, the MoU will be presented to Elliot Jones representing Maya Angelo Foundation, Jason Harrison of Tredic Corporation UK and some other  American/Asian investors.‎

While signing the MoU, the Ooni expressed optimism that the project would span development across Ile-Ife, Osun State, Nigeria and Africa at large. ‎He explained that the partnership with House of Oduduwa was fastened to ensure the success of the project.

“‎The initiative is an encouraging one and I urge the team not to relent. When I visited the USA, I met with our Diasporan people  and told them that people built USA, it did not just develop. Just like the USA citizens built America, I am glad that some Nigerians in the diaspora are also keen to the development of their mother land.

I am totally in support of the project. ‎I have never started a project without completing it and I hope this will be completed within the stipulated time. We don’t want this to be a typical project that will start and won’t end and because of that we need to sign the MoU today. We will also be fulfilling a larger part of what is expected of us by making available the required land,” he said.

A representative of the American based firm, ‎Muyiwa Onitilo, explained that similar initiative helped India to generate over eight million jobs. According to him, the hub is projected to create employment for 1000 youths in its first phase in Ile-Ife and Osun State.‎

“The project will deliver a modern and progressive Ile-Ife with a strong real estate, technology and infrastructure backbone. It will deliver a master planned community that will allow residents to increase their productivity.

60 per cent of those that will be employed are indigenes of the host community. This is an intiative to improve the home,” he said.

Another member of the team, Victory Oluwasegun explained that the hub would transform the ancient city to a world class place where children will grow with technology.

“Our plan is that immediately the students are leaving secondary school, they enrol and grow with technology. We want our system to be familiar with technology and we will be doing that in recognition of distinct features and historical figures. We developed it with a solution that caters for poor maintenance culture. With the technological hub, we will be able to advance the uniqueness of Ile-Ife to a world brand,” he said.