Most People who Join Violent Extremist Groups are in Search of Identity, or Purpose, or Power - John Kerry 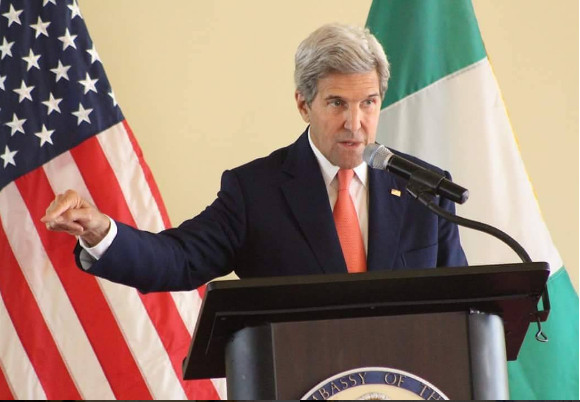 The U.S Secretary of State, John Kerry on Tuesday said that most people who join violent extremists groups do so because they are in search of an identity, adding that they have no hope for the future, and no faith in legitimate authority.

He said this while giving a speech at the “Community Building and Countering Violent Extremism” event held at the Palace of the Sultan of Sokoto.

Kerry is currently in Nigeria to discuss U.S. cooperation with Nigeria over Boko Haram, economy and human rights issues.

He has held meetings with the Sultan of Sokoto, Sa’ad Abubakar, President Muhammadu Buhari, and the governors of some Northern states.

Kerry said condemning terrorists’ ideologies is not sufficient to win “the struggle for the future”, adding that nations ought to office hope to their citizens, and deliver on its promises.

“Now we have learned a lot about extremism in the last years. We obviously have been consumed by the fight against it since 2001, when out of the blue the attacks in New York took place. People join violent extremist groups for a number of different reasons – and some, obviously, do so against their will. But there are far too many who join the ranks of these organizations because they have trouble finding meaning or opportunity in their daily lives – because they are deeply frustrated and alienated – and because they hope groups like Boko Haram will somehow give them a sense of identity, or purpose, or power.

We see this in every part of the world – whether we are talking about the Lake Chad Basin or the Sahel, or a village in the Middle East or a city in Western Europe, it’s the same. When people – and particularly young people – have no hope for the future and no faith in legitimate authority – when there are no outlets for people to express their concerns – then aggravation festers and those people become vulnerable to outside influence. And no one knows that better than the violent extremist groups, which regularly use humiliation and marginalization and inequality and poverty and corruption as recruitment tools,” Kerry said.

Kerry added that to effectively counter violent extremism, military action has to be coupled with a reinforced commitment to values like integrity, good governance, education, compassion, security, and respect for human rights.

“So to start with, it is essential to build and rebuild trust in government, trust in the military, trust in law enforcement community, wherever that trust has been diminished,” he said.