Here's How You Can Attend the Project LEAD International Day of the Girl Child Conference | Today, October 8th
Embed from Getty Images

D’Tigers earned their first win at the 2016 Olympics Basketball Tournament by creating the biggest upset to date in the competition with a 90-76 defeat of Croatia on Saturday night.

With the victory, the African champions improved to 1-3 to keep alive their hopes of advancing to the quarter-finals, with Croatia dropping to 2-2.

The win ranks as Nigeria’s biggest at the world level since they surprised Greece 80-79 at the 2012 FIBA Olympic Qualifying Tournament.

Heading into their final group game on Monday against hosts Brazil on the back of this win can only do their confidence a world of good.

Croatia will face European rivals Lithuania and whether or not they reach the quarter-finals may be dictated by more than the result of their game. 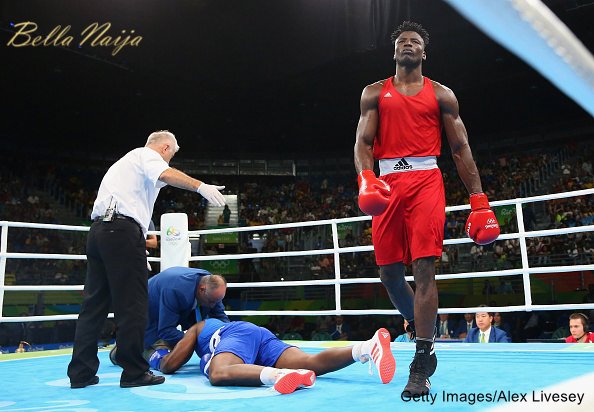 Efe Ajagba of Nigeria knocks out Nigel Paul of Trinidad and Tobago in the Men’s Super Heavyweight (+91g) preliminaries on Day 8 of the 2016 Rio Olympics at Riocentro – Pavilion 6 on August 13, 2016 in Rio de Janeiro, Brazil.

Similarly, Nigeria’s sole representative in the boxing event at #Rio2016, Efe Ajagba, has qualified for the quarter-finals.

He knocked out Trinidad and Tobago’s Nigel Paul in round one of the men’s super heavyweight category to progress into the last eight.

He will now face Ivan Dychko from Kazakhstan.

According to Complete Sports, Ajagba won bronze at the 2014 Commonwealth Games in Glasgow, Scotland and gold at the 2015 All Africa Games in Congo Brazaville.

Unfortunately, Nigeria’s Blessing Okagbare was unable to qualify for the finals of the women’s 100m event after placing 3rd in her heat and a time of 11.09secs.

All hope is not lost for Okagbare as she will also compete in the women’s 200m, women’s long jump, and women’s 4X100m relay events