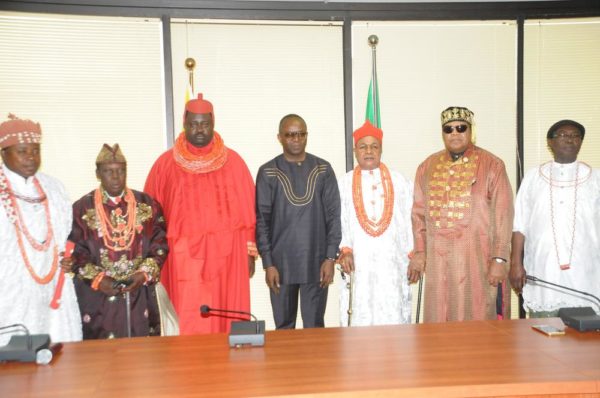 The Niger Delta Coastal States’ Monarchs on Thursday gave six conditions for the Federal Government to achieve and sustain the peace in the region.

Williston Okirika, the Bolowei of Gbaramatu Kingdom, read out the conditions on behalf of the chiefs when they visited the Minister of State for Petroleum Resources, Dr. Ibe kachikwu, on Thursday.

Release of 10 innocent school children arrested by the Nigerian Army on May 28th in Oporoza and others in detention on trumped up charges.

Return of the Golden Sword, being the symbol of authority of the Gbaramato traditional institution,” he said.

Other conditions he said, included return of the three traditional council speed boats in custody of the Nigerian army.

He added there must be cessation of hostilities perpetrated by the military in the Niger Delta Region.

“Equally important, the Federal Government should make a categorical statement about the opening of the Maritime University- Okerenkoko, Delta, for academic activities in 2016 /2017 session,” he said.

He assured that the monarchs would continue to support every effort that would help bring peace and sanity in the region.

Responding, Kachikwu commended the monarchs for the visit and said that restoring peace in the region was imperative.

He said the ceasefire announced by the Niger Delta Avengers was a welcome development, adding that every effort must be made to sustain it.

He said that it was unfortunate that after the announcement it was heard that pipeline in Nembe community was vandalised and the country lost about 150 barrels of oil and a high quantity of gas.

“This inability to stay steadfast creates military intervention because government cannot seat down and watch production go down.

The president has shown a lot of patience and believed that engaging the communities is the best model.

You should continue to reach out to others to ensure total ceasefire because as production goes down, it affects both states in tackling the financial burdens,” he said.

Kachikwu said that Federal Government had spent about $40 billion in refurbishing the region in the last 10 years.

He said that there was the need for the money to be applied in the proper way to ensure development.

He urged the people and royal fathers to ensure that monies were channeled in the proper way for the region.

He said that government was ready to always support a positive course for the region as it had lost 50 per cent of its revenue to drop in oil price and worsen by militants operations.

Presently, production has reduced from 1.6 million barrel per day to 1.4 million; may translate to 60% down in revenue generation.

“The people that pay the biggest price for militancy is the Niger Delta, time has come to engage in solid dialogue and everybody has a role to play. Ceasefire must stay to enable the military stop interference, we must find positive way to solve the problem of the region,” he said