There is so much excitement in Nollywood for this year’s Toronto International Film Festival especially as TIFF chose Lagos for its “City To City” spotlight (click here if you missed it). What this means is that 8 movies – The Wedding Party, 93 days, The Arbitration, Okafor’s Law, 76, Green White Green, Just Not Married and Taxi Driver – will premiere at the international film festival. 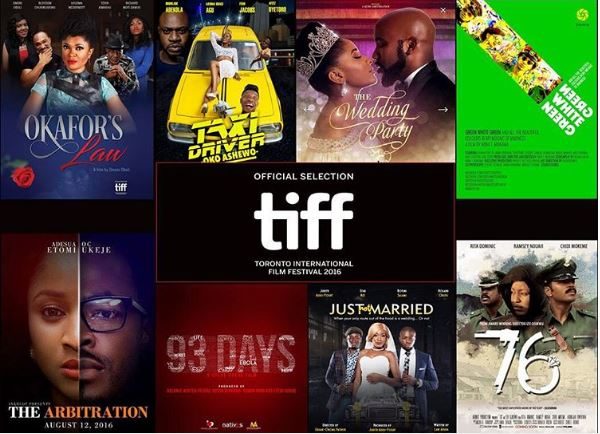 The lineup showcases gutsy new works by contemporary directors living and working in one of the world’s biggest film industries. It’s a huge opportunity for Nollywood to showcase the Nigerian movie industry as a fast-growing sector in the economy.

When the festival artistic director Cameron Bailey talked about Lagos, he said

“Vital, complex and inspiring, Lagos is entirely unique. The city of Fela Kuti’s music has also given birth to one of the world’s most vibrant film industries. The 1,000 low-budget features ‘Nollywood’ produces each year generate about $1-billion in the box office. Now, from that commercial hotbed, a new generation of filmmakers is emerging to both advance and challenge Nollywood. Bigger budgets, greater artistic ambition – the new cinema of Lagos is bold, exciting, and ready to take its place on the international stage. We’re excited to share the creativity of this remarkable city’s filmmakers with TIFF audiences in September.”

See the movies being showcased below.

Written by playwright Tosin Otudeko and Kemi Adetiba, ‘The Wedding Party’ is the story of Dunni Coker (Adesua Etomi), a 24-year-old art gallery owner and only daughter of her parents about to marry the love of her life, IT entrepreneur Dozie (Banky W). The couple took a vow of chastity and is looking forward to a ground-breaking first night together as a married couple. Ali Baba and Sola Sobowale play the role of Dunni’s parents while Iretiola Doyle and Richard Mofe-Damijo play Dozie’s parents. Other notable names in the stellar cast include Zainab Balogun, AY, Beverly Naya, EmmaOhMaGod, Lepacious Bose, Somkele Idhalama, Daniella Brown, Ikechukwu Onunaku, Ayo Makun, Enyinna Nwigwe, Kunle Idowu, Sambasa Nzeribe, Hafiz Oyetoro amongst others.

‘The Arbitration’ tells the story of Gbenga (O.C Ukeje) and his employee Dara (Adesua Etomi) who had an affair. After the affair ended and Dara left the company, she sued Gbenga and accused him of rape. An Arbitration panel was constituted to find out the truth. The upcoming movie also stars Nollywood actors like Sola Fosudo, Ireti Doyle, Somkele Iyamah, Beverly Naya, Gregory Ojefua and more.

Nollywood superstars Ramsey Nouah, Rita Dominic, and Chidi Mokeme headline this gripping drama set against the backdrop of the attempted 1976 military coup against the government of General Murtala Mohammed.

In this charming caper comedy, a bright but broke undergrad striving to escape the slums gets in over his head when his modest criminal enterprise goes a bit too far. Directed by Uduak-Obong Patrick, the movie stars Judith Audu, Stan Nze, Rotimi Salami, Roland Obutu, Brutus Richard.

A small-town mechanic turned chauffeur for the mob gets caught up in the troubles of a beautiful sex worker, in this Scorsese-meets-Nollywood crime comedy that transforms the fast-paced and vibrant city of Lagos into an expressionistic film noir metropolis. Directed by Daniel Emeke Oriahi, the movie stars Femi Jacobs, Ijeoma Grace Agu, Odunlade Adekola and Afeez (Saka) Oyetoro.