Nigerians Should be Committed to Righteousness - Yemi Osinbajo 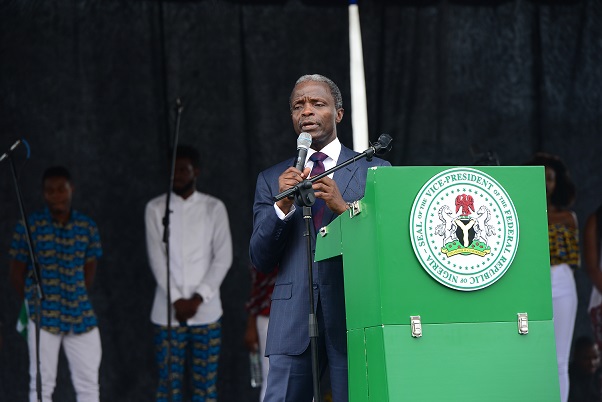 The Vice President, Professor Yemi Osinbajo, said on Friday in Abuja that although Nigeria had people who could pray, they lacked commitment to righteousness.

He made the remark at a Special Banquet to mark the 20th anniversary of Nigeria Prays, the pet project of former Head of State, General Yakubu Gowon.

Osinbajo said that if the citizens truly believed in and walked in the ways of Jesus Christ whom they profess to adore and stood up for the truth, righteousness and justice, the country would clearly witness a turn-around.

According to him, there is the need to pray to God always but it is more important that Christians turn away from evil in order to make the country great.

Osinbajo said that preachers had failed to tell the people that it was wrong to take bribe or accept money from government officials, adding that nations that followed the principles of scripture had emerged great.

He said prayer and fasting were good, but that they were not enough to lift the country except the citizens turned away from evil.

“The principles of hard work, integrity and innovation are things that made other countries great and they are all in the gospel and if we follow the principles, we can be great,’’ he stressed.

The vice president extolled the virtues of honesty, integrity and hard work of Gowon and urged Nigerians, especially leaders to emulate him.

Earlier, Gowon said that the group had spent the past 20 years praying for the healing of the country.

He said that passage of time had not diluted the vision of Nigeria Prays group.

“It has been an eventful journey to prepare a highway for God in our nation.

By His grace, we have succeeded in laying a solid spiritual foundation for national reflections and intercessions.

Through prayers, rallies, seminars, Nigeria Prays has created an opportunity for Nigerians and friends of Nigeria, irrespective of denominational affiliation and religious background,’’ he said.

According to the former head of state, we have to continue to promote the virtues of patriotism and transparency in the citizenry and good governance and incorruptibility in leadership.

He said that in spite of how much Nigerians had prayed to exit difficulties, a lot needed to be done and expressed optimism that the Holy Spirit would lead the way for the nation to be healed.

A cleric, Pastor Paul Adefarasin, in a sermon said that Gowon was an exemplary leader and urged others to be patriotic and avoid partisanship so as to help in building bridges for development and unity of the country.

He prayed that God would lift Nigeria and its leaders up and heal the country from the harm of corruption.

The event was used to present a book on Gowon titled “God’s Praying General’’ and launch of a N2 billion fund for the building of Nigeria Prays Centre.