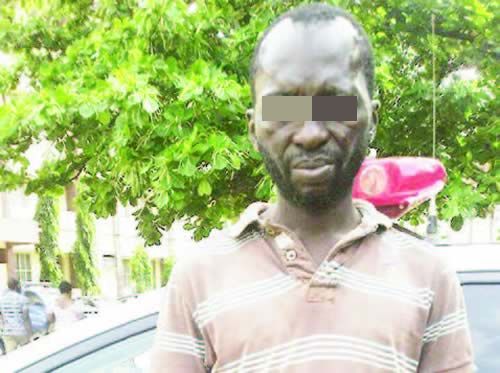 A seven-time convict, Emmanuel Oyewunmi, 41, who was arrested by operatives of the Rapid Response Squad (RRS) of the Lagos State Police Command for allegedly stealing from a driver and a passenger, has said that hard drugs have been the cause of his imprisonment.

According to PUNCH, Oyewunmi was arrested at Ojodu Berger bus stop on Friday.

Police had launched a manhunt for him after he allegedly stole the phone of one Adesewa Oni in the Alausa area of the state.

He reportedly stole phone while he was in Oni’s car when the latter went to use the nearby ATM to withdraw money to pay him for using the car park.

The victim reportedly paid him N1,000 instead of the N200 he requested for, not knowing that the suspect had stolen her phone.

According to Oni: “I had driven five minutes away from Ikeja when I felt the urge to make some calls. It was then I realised that my Samsung Galaxy S4 was missing. Quickly, my mind went to him and I realised my folly. How could I have left a total stranger in my car alone, leaving documents and valuable items in the car with him? I traced him back to that spot, but he was gone.”

Oni said she reported to the RRS, which then launched a manhunt for the suspect.

Oyewunmi was however arrested on Friday after stealing N600 and a phone from a bus driver and a passenger in the Ojodu Berger area.

The Ikale, Ondo State indigene confessed to have stolen Oni’s phone, blaming his stealing habit on his addiction to hard drugs.

He also admitted that he stole the phone and money from a bus driver and passenger.

He added that his wife and parents rejected him due to his addiction.

“As soon as I got the woman’s phone, I went to Ipodo in Ikeja to get hard drugs. The hard drugs dealer bought the phone from me at N8,000.

Hard drugs have destroyed my life. They were the cause of my rejection by my wife and my father. I got hooked on drugs while I was young and getting out of the addiction has been extremely difficult for me.

Some faith-based non-governmental organisations have assisted me through rehabilitation in the past. I have, however, always gone back to the habit. (Hard) Drugs have been the predominant cause of my imprisonment. If I am imprisoned now, it will be my eighth time and third time this year,” he said.

The Police Public Relations Officer, SP Dolapo Badmos, who confirmed the arrest, urged Lagosians not to expose themselves to criminals.

Falana, Ozekhome, Melaye React to Arrest of Judges By DSS