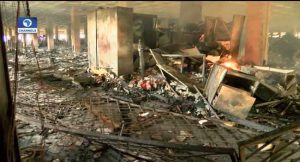 Aftermath of the Fire

Fire on Saturday razed down the library complex of University of Jos, which also houses the faculties of Management and Social Sciences.

The Vice-Chancellor, Prof. Sebastian Maimako, who briefed newsmen on Sunday after inspecting the damage, said the fire started about 6:30PM.

Maimako said  that books, unmarked examination scripts and other materials were burnt in the building.

“On the fourth floor, which was completely razed down, we have the departments of Psychology, Political Science, Economics and office of Dean of Management sciences,” he said. 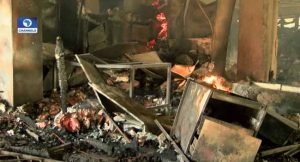 The departments of accounting and business management are also on the floor.

The vice-chancellor expressed shock over the incident and  said that the building, which was officially opened in 1997, also had materials from the faculties of Education, Arts and Department of Geology.

The Director of Fire Service in Plateau, Samuel Musa, said that it took six hours to put out the fire.

Musa said that when the fire was reported at 6.40PM, his men immediately rushed to the scene but had to call for reinforcements from other units because of the magnitude of the fire.

The Registrar, Mr Monday Danjem, said in a statement in Jos on Sunday that the decision was taken “pending an emergency Senate meeting scheduled for Monday, October 10.”

The statement, however urged students and members of the university community to remain calm and go about their normal businesses, noting that the situation had been brought under control.