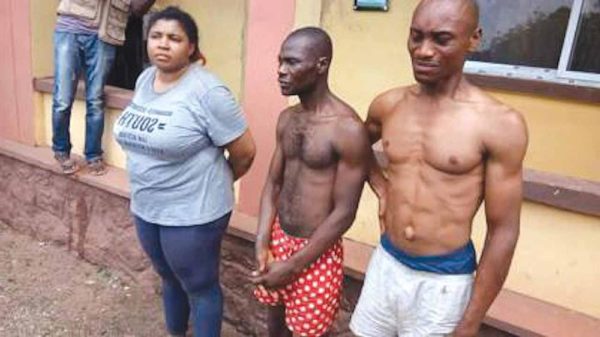 A banker, Oluchi Tochukwu Onyebuchi, who allegedly hired two assasins to kill her husband, was granted N1 million bail by the Ebute-Meta Chief Magistrates’ court in Lagos on Tuesday.

The Magistrate, M.O. Olajuwon also ruled that the two alleged hired assassins, Chigozie Nworie and Kingsley Ofelete, be kept in custody at the Ikoyi Prisons.

The Guardian reported that the prosecutor, Insp. Julius Babatope, told the court Onyebuchi hired the two assassins to kill her husband on October 9 at No. 18, Fatai Kofo St., Agungi, Lekki.

He further said the accused took with her the victim’s car Land Rover jeep, HP laptop, iPhone, car documents and other valuables estimated at N9.3 million.

Onyebuchi had told the two assassins where she had kept the machete, cutlass and acid in her husband’s house which they were to use to kill him. The alleged assassins were caught absconding with the victim’s bloodstained Range Rover to deliver the car to Onyebuchi’s brother in Anambra.

The three are facing a three-count charge of conspiracy, robbery and attempted murder. The accused’s plea was not taken.

Olajuwon adjourned the case to January 23.

Source and Photo Credit: The Guardian

10 of the World’s Most Unusual Christmas Traditions