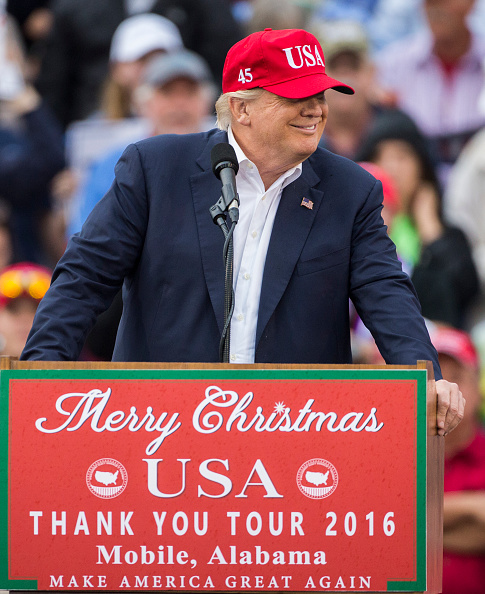 MOBILE, AL – DECEMBER 17: President-elect Donald Trump speaks during a thank you rally in Ladd-Peebles Stadium on December 17, 2016 in Mobile, Alabama. President-elect Trump has been visiting several states that he won, to thank people for their support during the U.S. election.

Trump took to his twitter handle to break the news of his victory to his supporters.

“We did it! Thank you to all of my great supporters, we just officially won the election (despite all of the distorted and inaccurate media),” Trump said.

“Today marks a historic electoral landslide victory in our nation’s democracy. I thank the American people for their overwhelming vote to elect me as their next President of the United States. This election represents a movement that millions of hard working men and women all across the country stood behind and made possible. With this historic step we can look forward to the bright future ahead. I will work hard to unite our country and be the President of all Americans,” Trump also said in a statement.

“Congratulations to Donald Trump; officially elected President of the U.S. today by the Electoral College!”

However, Hawaii’s electors are reportedly still set to meet later on Monday, with the state’s four votes expected to go to Hillary Clinton, who won the popular votes by almost three million.

The result will be officially announced on January 6, 2017 in a special joint session of Congress.

Vice President Joe Biden, will open the electoral votes before a joint session of the new Congress, where they will be counted and certified.

The Electoral College met in all the 50 U.S. states and Washington, D.C. on Monday. Afterwards, the president-elect will be communicated to officially arrive at the Capitol Hill on January 20 for his inauguration.

Under U.S. law, electors must formally vote for the president and vice-president before they can lead the country.

Trump’s victory in various states in the  November 8 election put him in line to get 306 of the 538 electoral college votes as against Clinton’s 232, according to projections.

“I believe my money will come back” Nigerians React to Frozen MMM Accounts on Sahara TV – Watch!