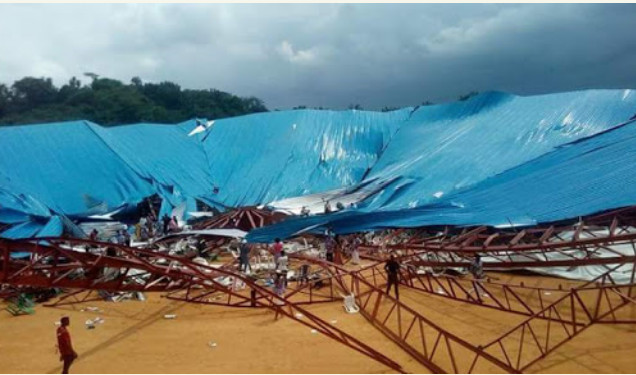 Rescue workers are battling to evacuate victims in a church building which collapsed in Uyo on Saturday while service was in session.

The Reigners Bible Church, located along Uyo Village Road, was filled to capacity during the service.

Some senior government officials were also reportedly in the service when the buildinh collapsed.

One witness told PREMIUM TIMES that the Pastor was being consecrated as a Bishop when the tragedy occurred.

“Apostle Akan Week was being consecrated today so the programme was holding inside the Church when suddenly, the whole building collapsed. Many people are buried under the debris as emergency workers continue rescue exercise,” the witness said.

The witness added that the building was being upgraded to accommodate the high number of guests expected.

Governor Udom Emmanuel of Akwa Ibom, who was at the service was said to have been whisked away by Security Operatives as the building started to collapse.

The governor was the special guest of honour at the service.

A witness told NAN that the building collapsed 30 minutes after the governor arrived.

“When we were about taking offering, 30 minutes after the governor came in, the building caved in. Security operatives took him away,’’  he said.

When NAN correspondents visited the scene, security operatives had cordoned off the entire building while trying to rescue those trapped in the debris.

Another witness, Uduak Effiong, said that a female victim’s bowel was ripped open by the tragedy.

Effiong, who is a communication arts  student of the University of Uyo, said that she lost three friends to the incident.

Joseph James, who also witnessed the building collapse, also said that the Founder of the church, Akan Weeks, was also brought out unhurt.

Some rescue team members said that over 60 casualties had been removed from the debris.

However, the state Police Public Relation Officer, ASP Cordelia Nwawe, said that she could not confirm the casualty figure since rescue operations were ongoing.

She said that security operatives had been drafted to maintain law and order at the scene to prevent hoodlums from cashing in on the situation.

“Rescue team members are trying their best to rescue all the victims trapped at the collapsed building. We cannot tell you the exact number of casualties now as the rescue operations are on,’’ she said.

The rescue team at scene is made up of workers of Julius Berger Construction Company, the police, army, Fire Service, Nigeria Security and Civil Defence Corps, Nigerian Medical Association and the Federal Road Safety Corps.