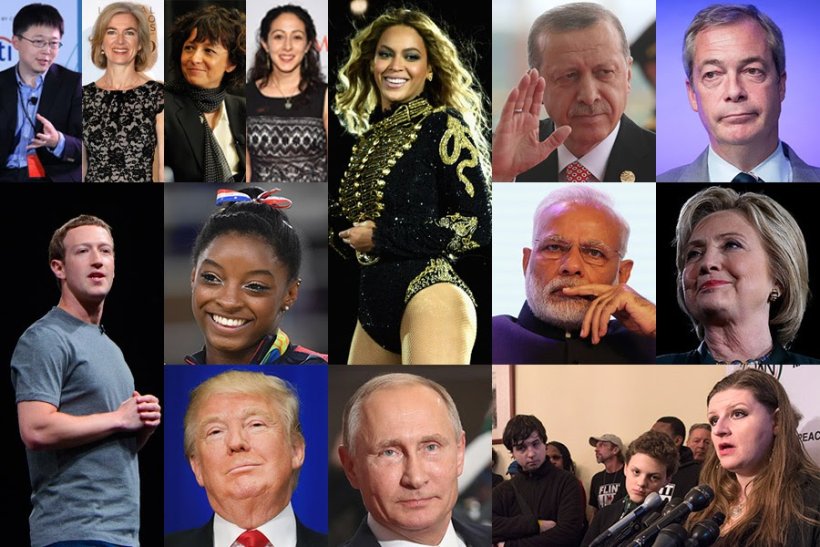 TIME Magazine has released the names of the 11 finalists for the 2016 Person of the Year.

The award is given each year to the person “who most influenced the news, for better or for worse”.

The finalists were revealed on Monday on NBC‘s Today.

Making her Olympic debut in Rio de Janeiro, the talented 19-year-old gymnast earned four gold medals and one bronze, leading her “Final Five” team to victory and affirming her status as the best in the world.

The former First Lady, New York Senator and Secretary of State became the first woman to receive the U.S. presidential nomination of a major political party, going on to lose the election but win the popular vote—the culmination of a hard-fought, divisive presidential race.

These scientists have developed a groundbreaking new technology that can edit DNA, a technique that has the potential to transform science and the human experience, as it could be used to find and remove mutations responsible for incurable diseases.

After an attempted military coup failed in July, the Turkish president has tightened control over the country, arresting political opponents, firing thousands of state employees and shutting down news organizations.

As head of the U.K. Independence Party, Farage was a face of the successful campaign for Britain to leave the European Union,positioning the referendum as the start of a global populist wave against the political establishment.

Local residents, along with civil-engineering professor Marc Edwards and local pediatrician Dr. Mona Hanna-Attisha, blew the whistle on the lead-poisoned water in Flint, Mich., drawing national attention to an environmental crisis that still has yet to be fully resolved.

With a headline-worthy Super Bowl halftime performance, a world tour and a powerful second visual album, Lemonade, Beyoncé continued to surprise and provoke a global audience, using her platform to speak out about racial injustice, police violence and feminism.

At the head of a powerful government, the Indian Prime Minister has guided his country’s economy into position as the “emerging-market world’s most positive story.” Late in the year, however, he also stoked concern when he unexpectedly banned 500- and 1,000-rupee bills—a move that aimed to curb untaxed wealth but now threatens to slow the country’s economic growth.

The Russian president made headlines this year with his country’s intervention in Syria and evidence showing that Russian operatives were responsible for the hack of Democratic National Committee servers.

After campaigning as an anti-establishment, populist candidate, Trump was elected the 45th President of the United States—a stunning end to a presidential bid that repeatedly broke with political precedent.

In the year that Facebook surpassed the 1 billion mobile daily users mark, the social-media titan has an unprecedented global reach. The CEO has also faced pressure to take responsibility for the site’s role in spreading fake or misleading news, amid criticism that those stories influenced the outcome of the U.S. presidential election.

The 2016 Person of the Year will be unveiled on Today on Wednesday morning, when the news will also be shared on Time.com.