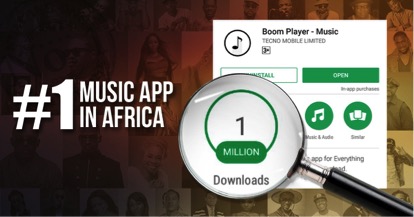 This development rightly places Boom Player as the leader of the pack while giving a wide gap to its competing platforms across Africa.

Boom Player has been on a runaway success since it started operations just over a year ago. The service, founded by the giant telecommunications company, TECNO Mobile now has more than 6 million app installations in total thanks to its pre-install strategy. Boom Player boasts of 400k+ Daily Active Users i.e music lovers who actively stream or download songs and videos of their favourite artists.

‘It’s very easy for music lovers to fall in love with the Boom Player app because it gives them what they want. From timely updates of latest releases in both audio and video formats, to lyrics and so many other amazing and interactive features available on the app, it is not a surprise that we have reached this milestone in such a short time, we only just put Boom Player in the Google Play Store 9 months ago, said Oye Akideinde, General Manager of the Mobile Apps Department, TECNO Mobile. ‘A new version of Boom Player app, which will blow our users mind, is also set to be released by March, 2017. Our target is to reach 1M Daily Active Users by December, 2017’, He continued.

Boom Player has become a must-have app for every music lover and a service that every artist needs to latch on to in order to connect with their fans while making revenue for their music sales.

If you’re yet to get on the coolest music streaming and download train in Africa, get the Boom Player app now in Google Play store.