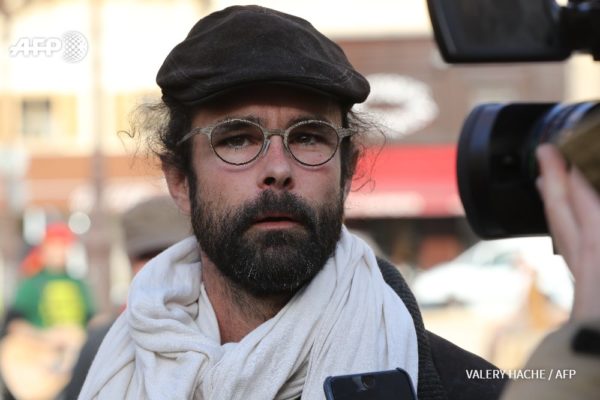 A French olive and poultry farmer, Cédric Herrou is facing a maximum 5-year prison sentence and a 30,000Euro ($31,500) fine, after he was accused of illegally helping people (primarily from sub-Saharan Africa), cross the border from Italy, and giving them shelter.

Earlier this year, French prosecutors at a criminal tribunal in Nice charged Herrou with illegally aiding undocumented migrants to make their way over the border.

37-year old Herrou was supported by a large crowd of activists and well-wishers at his court appearance. Banners were waved reading “I am Cédric” and “crime of solidarity”.

A verdict in the case is expected on February 10, Herrou’s lawyer Zia Oloumi told CNN.

Prosecutors are calling for an 8-month suspended prison sentence.

Speaking to reporters, Herrou said: “It’s not up to me to make a distinction between black and white, people with or without papers. It’s not my job. Farming is what I do, my job is feeding people and that’s what I do.”

Oloumi said that Herrou was arrested on October 20 with three other people at a property belonging to the French national railway company, SNCF.

Oloumi said that 57 migrants were with them and 30 members (including doctors and nurses) of Herrou’s NGO.

Oloumi added that Herrou has not committed any offense, and that it is a political trial.

“This is a political trial, what Cedric Herrou did is not illegal. There is no offense, the fact that there were foreigners in an illegal situation was not sufficiently proven. What worries me is that a value of the republic, solidarity, may disappear because of a wrongful interpretation of the law,” Oloumi said.

The lawyer said that out of the 3 persons arrested, only Herrou is being prosecuted on charges of “aiding the entry, stay and circulation of foreigners in an illegal situation” and the “illegal occupation of a private domain.”Oloumi said Herrou denied the charges.

Herrou remains unbowed, vowing to continue his work until the state takes responsibility for the plight of migrants.