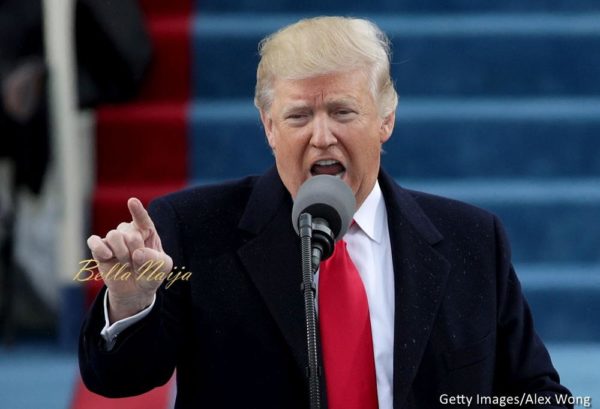 A Federal Judge in New York on Saturday night granted a stay order on President Donald Trump’s executive order temporarily restricting entry to the U.S. by citizens from seven countries.

The court stopped the authorities from deporting anyone with a valid visa and currently being detained or stranded at airports in the country, lawyers for the group said.

According to  the court order issued by Judge Ann Donnelly, the decision will stop officials  from removing individuals with approved refugee applications, holders of valid visas and people from the affected countries who have been authorised to enter, pending completion of a hearing on the matter in court.
Donnelly also wrote that the lawsuit would have a “strong likelihood of success.”

“There is imminent danger that there will be substantial and irreparable injury to refugees, visa holders, and other individuals from nations subject to the January 27, 2017 executive order,” Donnelly said.

Crowds outside the Federal Court in Brooklyn, New York, cheered the news.

The ACLU said the judge ordered a list of detainees to be provided, and said it will go through the names and ensure they are released.

“But the critical point tonight is no one can be sent back to one of these countries,” Lee Gelernt, Deputy Director of the ACLU Immigrants’ Rights Project, said.

The order, signed by Trump on Friday, puts in place a 120-day hold on entry of refugees to the U.S., and indefinitely suspends the admission of Syrian refugees until the president is satisfied that changes have been made.

It also suspends entry for 90 days from certain countries based on statute related to the Visa Waiver Programme.

The most recent version of that programme lists Iraq, Syria, Iran, Sudan, Libya, Somalia, and Yemen as countries to be affected by the President’s order.

Trump said the order was necessary to keep foreign terrorists out of the U.S.

The president had during his campaign and after taking office called for “extreme vetting” of some people  entering the country.

The order has drawn many criticisms since Friday, prompting widespread protests especially in New York.

Protests erupted in several airports across the U.S. on Saturday over the executive order, which turned into celebrations after the stay was granted.

The ACLU had filed a lawsuit on behalf of two Iraqi refugees who were detained after arriving at New York’s John F. Kennedy Airport following the order.

They were later released, and a senior Trump administration official said waivers would be granted.

The ACLU then said it was seeking “a national stay that would block the deportation of all people stranded in U.S. airports under the programme.”

Anthony Romero, Executive Director of the ACLU, said Trump’s order would have caused people with valid visas and green cards to be turned back to Iraq, Iran and other countries.

He said the group believes around 200 people will be directly affected by Saturday’s stay.

“Clearly this is just the first day of what will be a very long battle,” Romero said.

He said the onus was now on the Trump administration to prove the executive order is constitutional.

Our BellaNaija Photobooth at the SLAY Festival was Super Fun! See all the Exciting Moments with our BellaNaijarians