What You Need to Know About President Trump's Ban on Immigrants/Non-immigrants from 7 Countries & Suspension of U.S Refugee Program 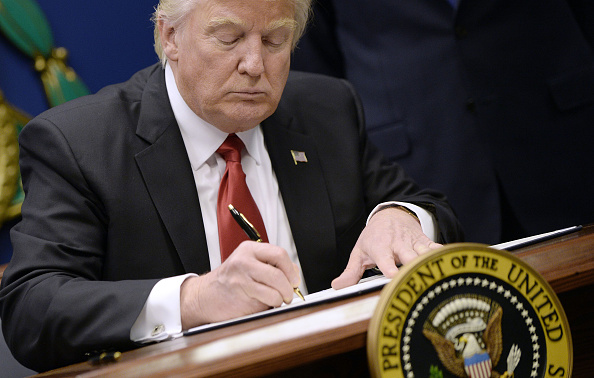 U.S. President Donald Trump signs executive orders in the Hall of Heroes at the Department of Defense in Arlington, Virginia, U.S. on Friday, Jan. 27, 2017. Trump signed an executive action on Friday to establish new vetting procedures for some people seeking to enter the U.S., saying the measure would prevent terrorists from being admitted into the country.

U.S President, Donald Trump‘s Executive Order signed on Friday is sending shockwaves round the globe, as the businessman turned politician banned citizens from seven countries, including three from Africa, from entering the U.S for the next 90 days. The policy also affects Green Card holders.

Trump also banned refugees from entering the U.S for 120 days, during which the U.S. Secretary of State will review the application and screening process for refugees to be admitted to the U.S.

Highlights of the Executive Order

The executive order banned citizens of seven countries, including three from Africa – Sudan, Libya, and Somalia – from entering the U.S for at least the next 90 days. The order countries are Iraq, Syria, Iran, and Yemen. This amounts to at least 134 million people, based on 2013 World Bank census data. Those countries were named in a 2016 law concerning immigration visas as “countries of concern.”

The policy also says that citizens of those countries who have U.S. resident’s permit are included in the ban.

But the executive order also makes clear those seven countries are just a starting point for a likely broader ban.

The order exempts diplomats and members of international organizations from the ban.

The order also directs the secretary of Homeland Security to conduct a 30-day review to determine which countries do not provide “adequate information” for its citizens to be issued visas to enter the US.

The Order also says no more refugees will be allowed in the U.S. for the next 120 days. Very few exceptions will be allowed on a one-to-one basis. Over 100,000 refugees entered the U.S. last year. When the program restarts, the number has been capped at 50,000.

During the 120 days ban, the U.S. Secretary of State will review the application and screening process for refugees to be admitted to the U.S.

Trump also states in the order that refugees should be prioritized for entry on the basis of religious persecution, “provided that the religion of the individual is a minority religion.” That would open the door for Christian refugees from Muslim-majority countries to be accepted in the U.S. while Muslims fleeing those countries would be excluded.

In the Order, Trump banned refugees from Syria. “I hereby proclaim that the entry of nationals of Syria as refugees is detrimental to the interests of the United States and thus suspend any such entry,” Trump said.

Read the full text of the Executive Order HERE.

Facebook’s founder, Mark Zuckerberg has reacted to the ban in a heartfelt letter, saying that “The United States is a nation of immigrants, and we should be proud of that.”

Also, the United Nations (UN), has cautioned the U.S government on the said move.

The International Organisation for Migration (IOM) and the UN High Commission for Refugees (UNHCR) in a joint statement said the contributions of refugees to their countries of refuge had been positive.

“The needs of refugees and migrants worldwide have never been greater, and the U.S. resettlement programme is one of the most important in the world. The longstanding U.S. policy of welcoming refugees has created a win-win situation: it has saved the lives of some of the most vulnerable people in the world who have in turn enriched and strengthened their new societies. The contribution of refugees and migrants to their new homes worldwide has been overwhelmingly positive,’’ the UN agencies stated.

According to the statement, resettlement places provided by every country are vital.

The UN agencies pledged to engage with the U.S. government to ensure the protection of refugees and migrants in the country.

“UNHCR, the UN Refugee Agency, and IOM, the International Organisation for Migration, hope that the U.S. will continue its strong leadership role and long tradition of protecting those who are fleeing conflict and persecution. UNHCR and IOM remain committed to working with the U.S. Administration towards the goal we share to ensure safe and secure resettlement and immigration programmes,’’ the statement said.

The statement said the UN agencies also urged equal treatment for refugees and migrants without discrimination.

“We strongly believe that refugees should receive equal treatment for protection and assistance, and opportunities for resettlement, regardless of their religion, nationality or race. We will continue to engage actively and constructively with the U.S. government as we have done for decades to protect those who need it most, and to offer our support on asylum and migration matters,’’ it stated.