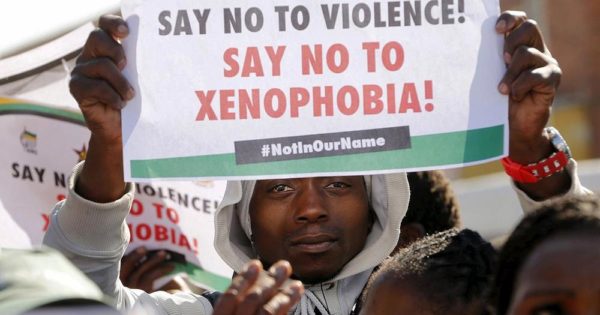 South African police on Friday arrested 136 suspects in connection with their involvement in the xenophobia mayhem unleashed on immigrants in Pretoria.

The arrests followed a fresh wave of xenophobic attacks in Gauteng Province heightened by an anti-immigrants march held in Pretoria on Friday.

At least 20 stores in Pretoria owned by foreigners were looted on Tuesday, but police could not confirm that the attacks had deliberately targeted foreigners. Domestic media are reporting vandalism and acts of violence in the Atteridgeville area west of the capital.

Anti-immigrant violence has flared sporadically in South Africa against a background of near-record unemployment, with foreigners being accused of taking jobs from citizens and getting involved in crime.

The march saw numerous shops around the city centre closed, with customers still locked inside.

The 15km march left a trail of destruction when marchers struck makeshift shelters of a religious group camping outside the Tshwane Events Centre.

Police fired rubber bullets to try and disperse protesters as well as the large number of foreign nationals who gathered together for safety.

Acting National Police Commissioner Kgomotso Phahlane said they had stepped in and the situation in Pretoria was now calm and under control.

Officers found a 5 litre container filled with petrol as well as clothes on one of the suspects.

Lt.-Gen. Phahlane said: “136 people have been arrested over 24 hours but we are unable to confirm how many of those arrested are South African and how many aren’t. We cannot allow situation to be overwhelmed by crowd. We use proportional force.”

Anti-immigrant violence has flared sporadically in South Africa against a background of near-record unemployment, with foreigners being accused of taking jobs from citizens and getting involved in crime.

“Many citizens of other countries living in South Africa are law abiding and contribute to the economy of the country positively. It is wrong to brandish all non-nationals as drug dealers or human traffickers. The threats and counter-threats on social media must stop,” Zuma said in a statement.

The Consulate General of Nigeria in Johannesburg has released two hotlines dedicated  to reports on any xenophobic attacks on citizens. 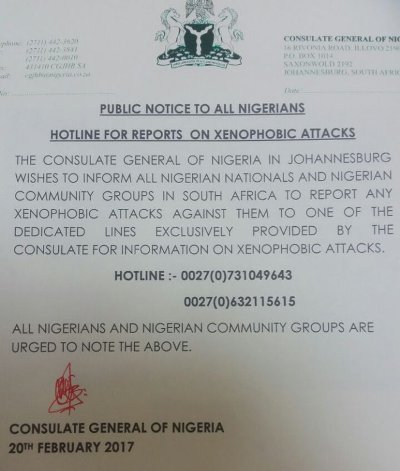 The Consulate urged all Nigerians and  Nigerian groups to take note of the numbers.